The map above is of Great Bradley from 1719. The inscription reads “A True Description of the several lands and premises belonging to Joseph Broksbank Esq. in the Parish of Great Bradley in the County of Suffolk in the months of August and September 1719”

There have been a number of histories produced about the village down the years. You can download or read them from the links below.

It is known that a Saxon Thane, Ulf, was on the lands in Bradley up until 1071. These lands were owned by Edwin Leofric (or Edwin, Earl of Mercia; in Anglo Saxon, Ēadwine). Edwin's grandmother was the celebrated Lady Godiva, who is reputed to have riden naked through the streets of Coventry. In 1066 Edwin and his younger brother Morcar was defeated by King Harald Hardrada of Norway at the head of a huge Norwegian army at the Battle of Fulford, near York. Harald was in turn defeated and slain by Harold Godwinson, five days later at the Battle of Stamford Bridge. Edwin's sister, Ealdgyth was married to Harold who died later that year at the Battle of Hastings. Edwin and Morcar reluctantly submitted to William the Conqueror. In 1068, Edwin and Morcar attempted to raise a rebellion in Mercia but swiftly submitted when William moved against them. Edwin died in 1071 when making his way to Scotland: he was betrayed by his own retinue to the Normans and killed. Edwin is mentioned in Alice's Adventures in Wonderland when the mouse attempts to dry itself and other characters by reciting a dry example of English history

Robert de Tosny came to England with William the Conqueror in 1066. Tosny is a village, population ~700, ten miles south of Rouen in the north of France. In 1071 when Edwin was assassinated and his lands distributed amongst William's followers. Robert de Tosny was granted the manor of Kirting and Bradley and one third of the king's rents in Stafford. He went on to build Stafford Castle.

The area we now know as Little Bradley was gifted to Richard, son of Count Gilbert along with the Thurlows. He came over at the Conquest and made his initial fortune in Kent through the great land redistribution which followed. He became William’s close adviser and one of those who defeated the greatest threat to the Crown in its first decade, the Rebellion of the Earls in 1075. Many of the English thegns (lords) had fought against William with the rebel Norman earls and all their lands were confiscated by the winners – including Richard who seized land from the thegns in 26 out of the 33 parishes in Risbridge hundred (the Anglo-Saxon administative area, roughly Moulton to Chedborough to Haverhill). 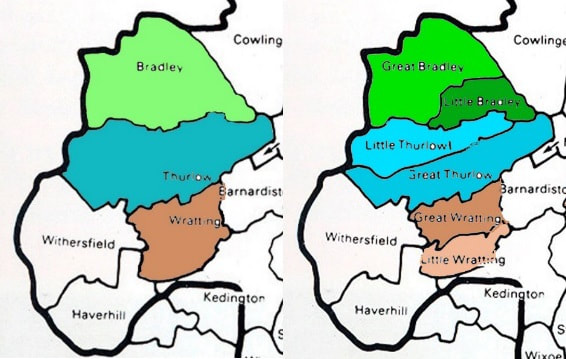 history of the parish council