The Romans and Great Bradley

The Romans first came to Britain in AD43 and gradually took over the lands of the Iron Age/ Celtic people. There are many Roman Roads in the area and a Roman Villa has been found under the church at Kedinton. Until 2011 there was little physical evidence of a Roman presence in Great Bradley (possibly because there have been few surveys here). In 2011 though, the most significant archaeological survey of the area was conducted during the laying of a water pipeline on the eastern bank of Kirtling Brook.  The pictures below  show ‘test pits’ dug by the archaeologists in one area and the pipeline itself. For more information on the pipeline see the page on the Water Transfer Scheme 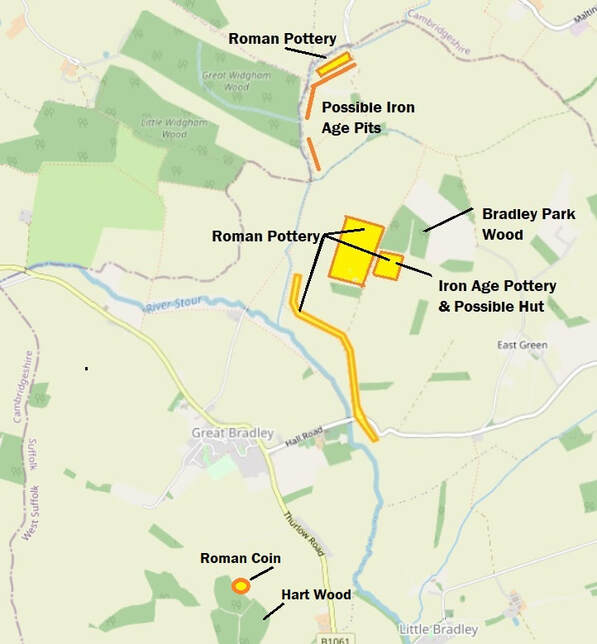 When Prastagus, King of the Celtic Iceni people (who held land covering most of what is now Norfolk), died in about 62AD he willed half his territory to the Romans hoping it would bring peace to the area. The Romans, though, decided they would take all the land. But the Iceni, led by Queen Boudicca and joined by the Trinovantes (in whose land Great Bradley probably was) attacked and defeated the Roman army in 60/61AD. They destroyed the three major Roman towns of Londinium (London), Verulamium (St. Albans), and Camulodunum (Colchester), killing many thousands of citizens. The revolt was eventually suppressed in AD 61 and the Roman rule then became stronger across the region.

Part of an early Roman settlement was found. It is just across the river Stour from the church and covered an area of at least 50m but continued beyond the excavation area, so was not investigated further. There were at least two phases of Roman remains dating from the 2nd to 4th century AD including possible enclosures around a cobbled surface. It is uncertain what it represented, perhaps a route way as it was in a hollow 20m long and 10m wide. The cobbles were chalk, flint and sandstone about 6-10cm in size.

Three Roman coins were also found in the area along with some pottery. One coin is a brass sestertius from no later than AD 102 in the Emperor Trajan’s reign. The other coins are later but only one is dateable because of their poor condition; It is attributed to the Valentinian dynasty (AD 364-78)
Over 100 pottery finds and some tiles have been found west of Bradley Park Wood. They are mainly 3rd – 4th century and includes bowls from the Oxford area; a white coloured lipped pouring bowl called Nene Valley mortaria from the Peterborough area; and reddish/brown Much Hadham bowls/ jars from near Bishops Stortford. In addition, some pottery was found near the old windmill mound at the top of Bradley Hill.
A Roman coin from the Constantine era (303AD - 337AD) had previously been found near Hart Wood south of the village (see map) by farmworker and resident of the village, Cyril Potter.

It was depicted on the bottom left of the first village sign, designed by Wendy Barnes, which stood from 1983 – 2008 before being replaced by the current one (See close-up at the top of the page).