This information builds on the History of Great Bradley published in the year 2000 by a dedicated team of villagers led by Barbara Buchs and is downloadable from the website at https://greatbradley.weebly.com/published-histories.html

Generally, the most important necessity for living, and the one which often decided the site of a village, was water. Great Bradley was probably no exception and a settlement could have arisen here for two reasons. First, it was close to the river, which was likely to have been drinkable during the initial settlement; and secondly, the river here was shallow enough for people to cross, as it still is today.

There is evidence that people lived in the period between the second and third glaciations, but it is not until the change in climate at the end of the last ice age, about 5,000 years ago, that agriculture as we know it came into being. The first recorded people in the area are the Bell-Beaker people who migrated from Europe in about 3,400BC. 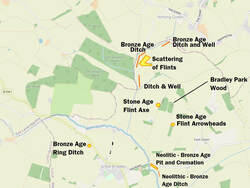 Stone Age and Iron Age finds near Great Bradley
The earliest evidence of people in the area is a flint pick axe and flint flakes found in the field next to Bradley Park Wood (pictured above) from the Mesolithic Era (Middle Stone Age, 9,000BC – 4,000BC). For the early settlers, who would have had to make a clearing in the valley, the river would have been quite a draw: fast flowing, clear and with easy crossing points. The area was more wooded than it is now. In fat, the word Bradley is derived from the Old English (Anglo Saxon) word meaning "wide clearing".

A Neolithic flint arrow head has been recorded, and a flint scraper has been recovered from the field behind the Old Rectory. Neolithic means new stone age and lasted between 4,000BC-2,200BC. It should be remembered, though, that the woodland and the heavy clay soils would have made the area quite difficult to cultivate and live in with just stone tools. Other parts of Suffolk, where the soil was lighter, were likely to be more populated. 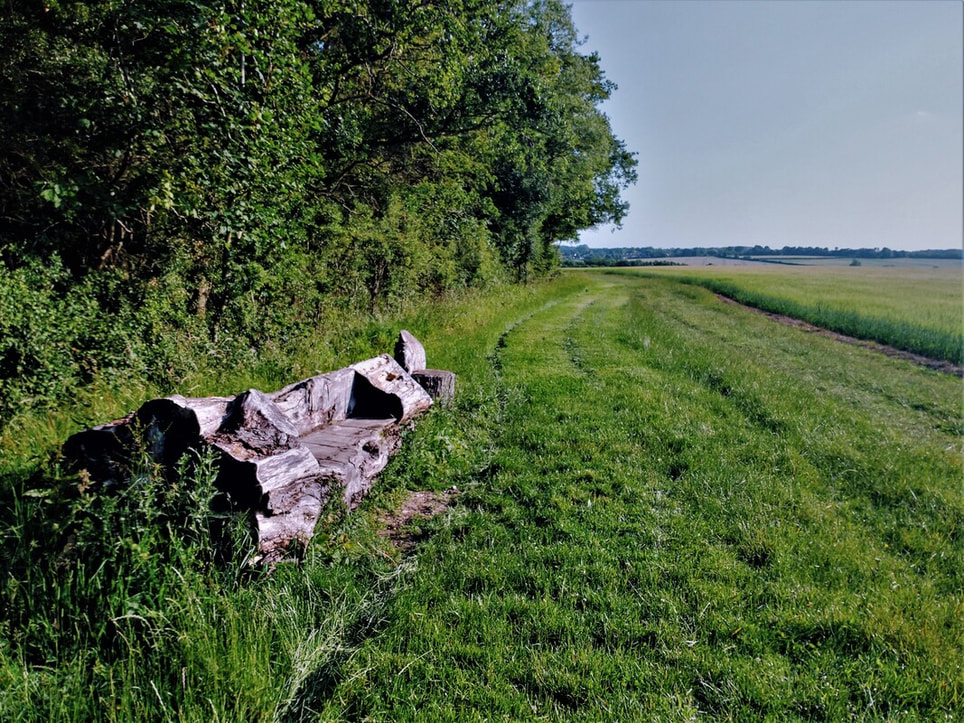 Looking towards the village from Bradley Park Wood and the field where the earliest evidence of humans in Great Bradley was found
In 2011 a pipeline was laid underground alongside Kirtling Brook and the River Stour.  This enables more water from the reservoir at Kirtling to be moved to Essex without having to put vastly increased volumes of water in these watercourses, which could disrupt the ecosystem of both the brook and the River Stour. The archaelogical survey that accompanied the pipeline provided the most comprehensive archaeological record for the area. It found over worked 800 flints, for example, as well as ditches that could be part of field systems

To find out more about the archaeology of the area see https://greatbradley.weebly.com/archaeological-finds.html.
Great Bradley, Suffolk, England