The British are often accused of being obsessed about the weather. With good reason, as its many variations impact on so many aspects of our life. Few feel its effects more than farmers and, therefore, my father started to measure the rainfall here in 1954. Since then the rain has been meticulously measured every day. The site at The Hall is an official one, and we send statistics at the end of each month to The Environment Agency/Met Office.

At the end of the 1990s all the historical data was put on computer and began to produce a series of graphs that make it easier to analyse the results.

Despite a somewhat ‘colder snap’ as I write, this had been another mild, somewhat wet winter. We started picking daffodils on the 28th December! 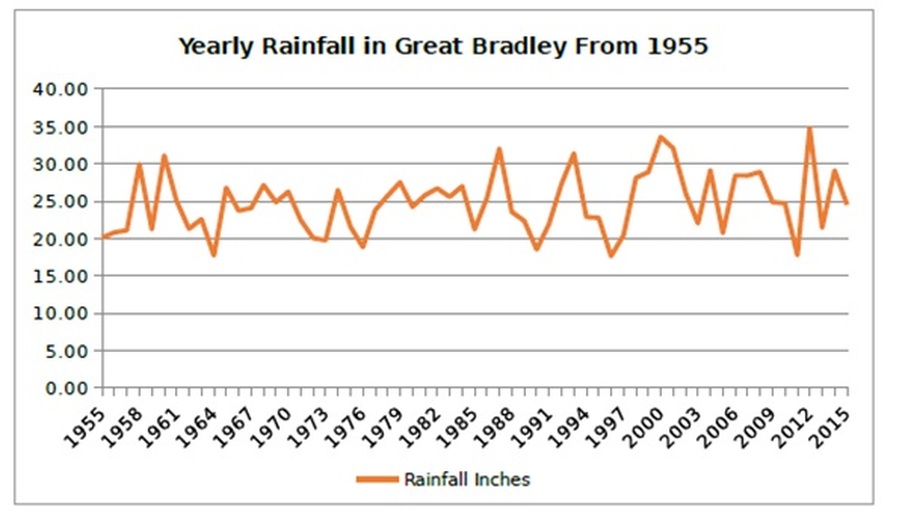 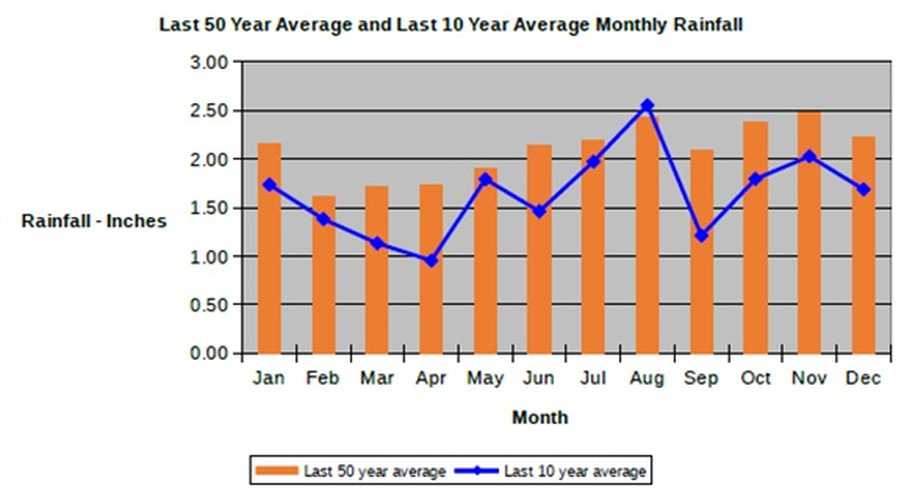 two years seem to validate this trend. This is important, and not necessarily good news, as it is the key
operational period of the farming year, covering both the harvest in the high summer and the cultivation/drilling
period in the early autumn.
Given this trend, I thought it would be interesting to look at the first half/second half split since we began
recording rainfall for the Met Office in 1954.

So it seems that following the 2000s, the wettest period (with an annual average of 27.40ins) since our records began, two trends have become apparent in this current decade. First, a reversion to a more long term average, somewhat lower level of rainfall (25.40ins per year to date in this decade in line with the 50 year average of 25.05ins). Secondly, we are indeed seeing a greater proportion of rainfall in the second half of the year than in any decade since the 1960s.

However, as it happens, this is not necessarily bad news as the average amount of annual rainfall in this decade is down to around 25ins, or lower as in 2015; the larger proportion in the second half is a ‘containable’ amount. Indeed, we now seem to be copying the 1960s in terms of total rainfall – the average annual rainfall for the 1960s was 24.40ins, almost exactly the same as the rainfall in 2015. So is it back to the ‘Swinging 60s’!? Let’s hope so because, as the graphs show, those years were far more consistent, and less extreme, than more recent decades in rainfall terms– halcyon days, with benign weather suiting farmers and gardeners alike! And good for music too!

We shall see whether my optimism about the weather holds good in 2016!
Technical details of the Weather Station

In 2000, it was the previous 46 years. I wrote that, “little is changing climatically, although the 1980s did produce a somewhat wetter trend, with a rise in the ten year rolling average from 23ins per year in 1980 to 26ins in 1988. Since then, we have reverted to a normal pattern.” and “rainfall amounts continue to be similar on average, although in the last 10 years patterns have been more extreme, like the 1950s”

Since 2000, however, a discernible trend has developed. Before looking at that, here are a few interesting highlights of rainfall patterns since 1954
What is the discernible trend to which I referred? I think that it can be seen from the two graphs set out below.
Table 1 is the 10 Year Moving Average.
Table 2 is the Average Rainfall by Month, showing both the 50 and 10 Year Rolling Averages.

You will see from Table 1 that the 10 year rolling average was approximately 23ins per annum in 1964 and this average broadly continued until 1982.  Since then rainfall has been far more erratic and, apart from a reduction in the late 1990s, it has been trending in an upward direction, but only significantly so since about 2000.  The 10 year rolling average as at the end of 2006 had reached all but 27ins, a big jump compared to the 23 – 24ins average which prevailed for so long.  From Table 2 you will see that this increased rainfall has come almost entirely in the period August to November.  As arable farmers, this is precisely the time when we do not want more rain!  August is the key month for the harvest and September/October are the key months for drilling next year’s crops.
Great Bradley, Suffolk, England