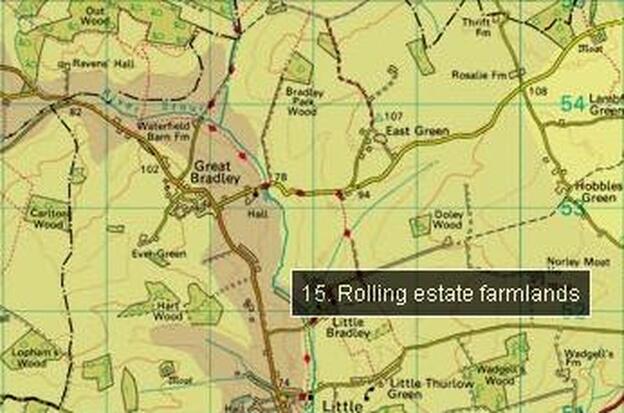 Key Characteristics A valley side landscape of deep loams, with parklands plantations and Ancient Woodlands

This landscape character type is found in a series of valley-side locations in south and east Suffolk:

A narrow strip that runs along the south side of the Belstead Brook and then along the coastal edge of the Shotley peninsula to Brantham on the Stour estuary, including the river valley around Holbrook (where it forms the sloping edge component to Ancient Estate Farmlands)

These gently sloping valley sides and plateau fringes have loamy or silty soils which are derived from glacial outwash and till deposits. The soils in this landscape are mainly the deep, well-drained, clayey loams of the Ludford or Melford series. The only significant exception to this pattern is a relatively small area around Coddenham where the soils are the much chalkier loams of the Swaffham Prior series, which are prone to drought.

Although there was some parliamentary enclosure of common-field arable in the upper Stour valley area, the amounts were small and its landscape effect was limited. Much of the landscape was already enclosed by the early 18th century, as is shown on a 1735 map of the Thurlows. In the Melford area there is a high correlation between the fields shown on late-16th and early-17th century maps and those existing now or recorded on 19th century maps. In both areas, and in the Gipping valley, the estate character is muted, limited to occasional straightening and realignment of a wider landscape of ancient enclosure. Straight boundaries are more of a feature of the Shotley peninsula, partly due to the efforts of the extensive Woolverstone estate in the 18th and 19th centuries, but even more to mid-20th century field amalgamations and re-orderings.

Maps of 1600-1 for areas adjacent to the east side of the Deben indicate the presence of numerous irregular closes and meadows intermixed with some common fields. The common fields had disappeared by the 18th century and today the pattern of fields is a mixture of old meadows, similar to those shown on the old maps, and more regular units related to the adjoining estate landscapes. Comparing 1730s estate maps with modern maps indicates that road lines have been changed and straightened, and that tree belts surrounding many of the fields are a post-1730s development, probably the result of landscaping works by the Rendlesham estate in the early 19th century – certainly they were there by the 1880s.

The valley-side locations of this landscape type, with their combination of access to water and arable potential, attracted settlement from an early date. Striking cropmarks at Long Melford seem to show a long Neolithic burial enclosure or mound overlain by a circular Bronze Age one – this suggests that farming communities in this part of the Stour valley were sufficiently settled to undertake substantial monumental works by the 4th millennium BC. There is certainly evidence of settlements in all the valleys by the Iron Age and in AD 43 a Roman fort was established in the Gipping valley as well as a Roman settlement underlying the medieval market town of Long Melford.

A string of substantial Tudor and Jacobean houses overlook the Stour estuary on the southern side of the Shotley peninsula – Erwarton Hall, Crowe Hall in Stutton  and Stutton Hall. Settlement in the upper Stour valley is mainly concentrated in a string of villages close to the river. Notable among them is Little Thurlow, the centre of an estate formed by Sir Stephen Soame, Lord Mayor of London 1598-9. His mansion burnt down in 1809, to be replaced by the existing Little Thurlow Hall in the 1840s. The layout of its splendid early-18th-century formal garden, shown in detail on a map of 1735, survives largely intact, including the long garden canal.

Not only residential settlement, but historical industrial uses of the land are evident. The sand and gravel resources of the Gipping valley have been extensively exploited leaving a series of large lakes including the extensive Broomfield Pit workings in Barham. The outcrops of chalk on the valley sides were exploited as early as the 14th century, but particularly in the 19th and early 20th centuries, resulting in substantial pits in Claydon and Coddenham, Much of the material was converted into lime for agricultural or building use, but there was also a whiting (powdered chalk for whitewash and other uses) manufactory in Claydon.  At Bramford there is an important early industrial complex between Papermill Lane and the River Gipping. The eponymous papermill was functioning in the 19th century, but was joined by the world’s first purpose-built superphosphate fertiliser factory in 1851 and in 1858 by Joseph Fison’s Eastern Union Works. Exposures of clay along the edge of the Shotley peninsula were exploited for brick-making in the 19th and early 20th centuries, e.g. the  Holbrook Creek Brick Works, the Shotley Brick Works, the Hare’s Creek Brick Works in Shotley and the Bourne Hill Brick Works in Wherstead.

Like the Gipping valley, there was a certain amount of industry around Melford – it had a thriving cloth industry in the Middle Ages (which provided much of the funding for the fine church) as well as corn mills, a paper mill, maltings, an iron foundry and horse-hair fabric and coconut matting factories, but most of these ceased to operate in the 20th century.

The Deben valley parcels of this landscape have an obvious estate character with plantations and coverts very prominent. This is typical of the late and often private enclosures of the sands of east Suffolk. However in the west around Long Melford and on the upper Stour the character is very different. The landscapes are generally ‘ancient’ in feel, so there are ancient woodland blocks on the edges of the landscape or framing them, and the estate character is muted but still present.

In general this rolling landscape, with its combination of woodlands, has a tidy estate countryside feel, reminiscent of the muted estate pattern of the Undulating Estate Farmlands. On the Shotley peninsular and at Rendlesham, however, the form is more akin to the regimented pattern of the Plateau Estate Farmlands or Estate Sandlands.

The influence of single estate ownership remains strong over much of this landscape, so the condition is often good despite the post war modification of the field patterns; In these areas hedges, woods and trees are well maintained as are many of the built features of an estate landscape. However, in the east on the Shotley Peninsular and around Rendlesham there are areas where the pattern and features of the landscape are highly modified by agricultural improvement. 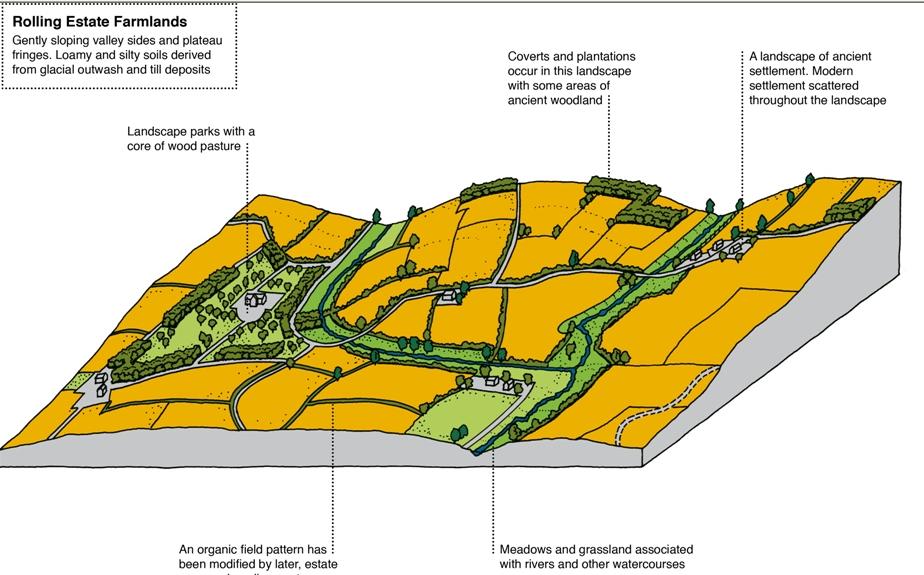 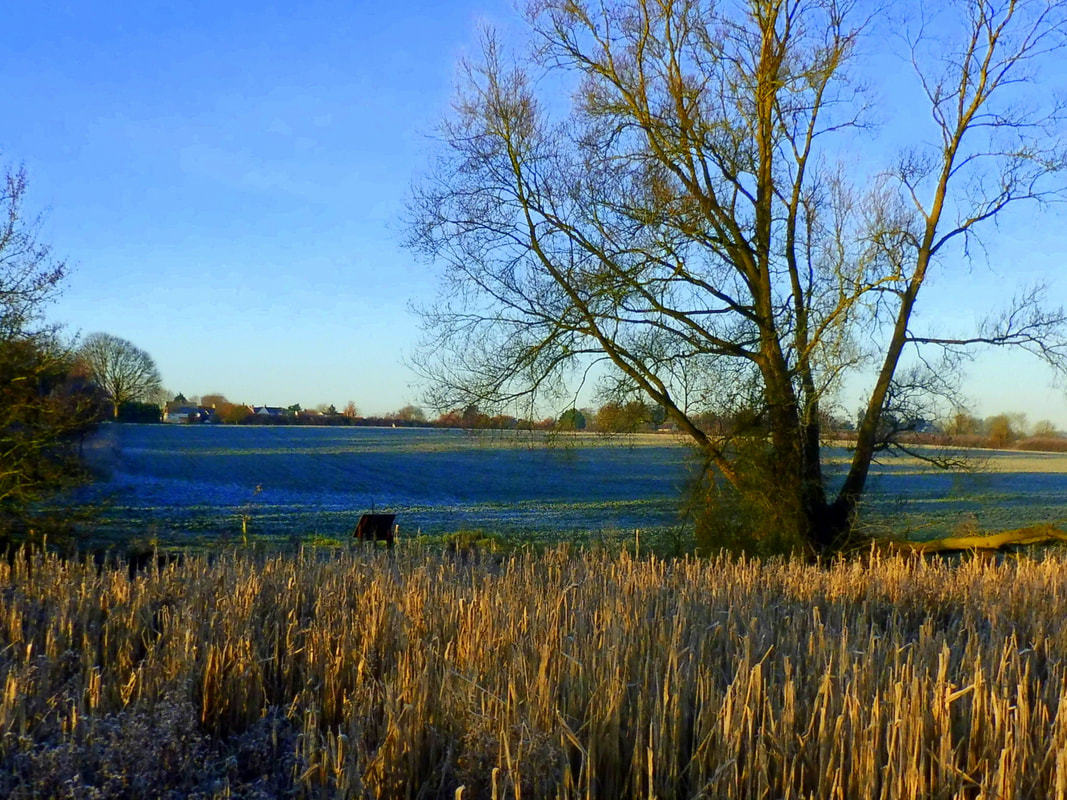