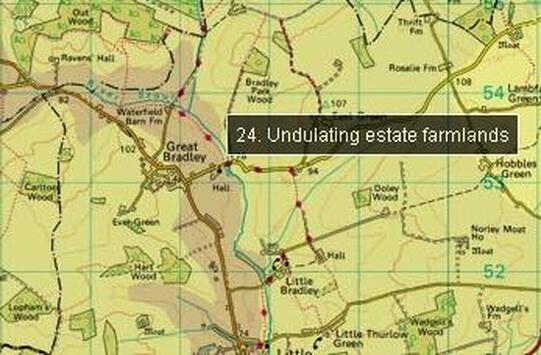 Within Suffolk this landscape character type stretches from Sicklesmere, on the south side of Bury St Edmunds, westward through Ickworth and Lidgate to the Cambridgeshire border and then southwards to the outskirts of Haverhill and Clare.

The chalky boulder clay or till deposited by the great Anglian glaciation forms the foundation of this area, but it is dissected, relatively deeply, by streams and rivers. The result is a landscape that undulates, sometimes strongly, in contrast to the landscape of the north Suffolk claylands, which have very little relative relief.

In the Hoxnian Interglacial there was a lake in a hollow on the surface of the Anglian till at Sicklesmere. The lacustrine clays that in filled it were exploited by a brick works in the 19th century while Roman kilns in the same area suggest an earlier exploitation of this resource.

The soils are predominately Hanslope clays except for some areas around Sicklesmere and Ickworth where they are more chalky and loamy. These clay soils are relatively free draining because of the slopes that they lie on and because of their mineral content.

In the Middle Ages there were several large wooded deer parks in this area, eg Hawstead Park, Southwood Park in Hargrave, Combey Park in Denham and Broxted Park in Hundon. In some cases small remnant areas of woodland still survive, but the area of Broxted Park was utilised for Stradishall Airfield in WWII and subsequently for Stradishall Prison. In post-medieval times important landscape parks were established at Ickworth (Capability Brown carried out work here 1769-76 for the 2nd Earl of Bristol), Nowton, Saxham, Dalham and Branches Park in Cowlinge (Ambrose Dickens consulted Capability Brown for works here 1763-5).

There is a strong estate character throughout much of this landscape. This is especially strong in the northern part between Sicklesmere and Ousden. Here the influence of parkland and complex arrangements of plantations is very clear, as at Dalham, Ickworth and Nowton. The fields are generally medium to large and organic in form, although there are areas of planned layout apparent throughout the landscape, indicating the systematic enclosure of some land.

The area contains a number of substantial villages, as at Sicklesmere, Horringer, Chevington, Chedburgh, Kedington and Hundon, but also smaller linear hamlets, sometimes called ‘streets’ or ‘ends’. Small- to moderate-sized greens with associated houses are also evident, of which Hawstead Green is perhaps the best preserved. Dispersed farmsteads occur more so in the northern part of the area than in the south, where the settlement pattern is noticeably sparser. Some of these farmsteads were moated and substantial examples survive at Chevington Hall (a former country retreat of the abbots of Bury St Edmunds), Hawstead Place (a former mansion of the Drury family visited by Queen Elizabeth I in 1578) and Denham Hall. There are also the remains of two small medieval castles at Denham and Lidgate – the latter associated with a failed unofficial medieval borough which is now a smallish village.

In the northern part of this landscape the woodland cover is extensive and interlocking, while in the south, around Kedington, Hundon and Clare the cover is much more fragmentary. The tree cover is a mix based around oak, ash and field maple. However, the influence of estates and their ornamental planting is pervasive – sycamore, beech, larch, chestnut and conifers all recur throughout the landscape. Beech is particularly noticeable on the western edge of the landscape in places like Dalham.

The views in this landscape are often full of well-treed farmland and woodland. The influence of parkland and ornamental planting in the undulating landscape creates some very pleasant views. Just to the south of Bury St Edmunds the view is often confined by woodland, while in the southern part of this landscape the views are more open. Without the interlocking woodland cover and fewer hedgerows the larger scale and shape of the landform is more evident.

Much of the area has a rather well kept appearance with strong linkages of hedgerows and woodland maintained by the influence of shooting on these estates. However, in the south, the pressure of industrial farming on the management of land and the larger field size has modified this landscape, removing much of the detail of the field pattern. 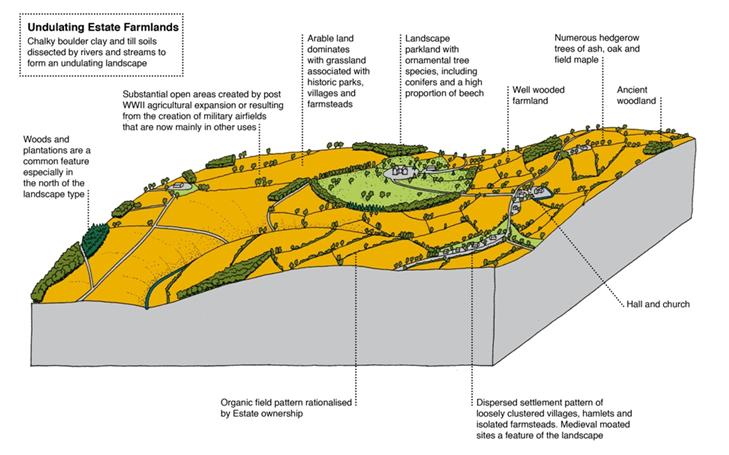