We are fortunate to have a number of old photos of Great Bradley.

Here are the ones we have, compared with more recent times. They are arranged as if you are traveling from the north (Newmarket side) through the village.

Sipsey Bridge. The Road near Sipsey Bridge showing the flood by the Carlton Turn in summer 1957

Lower Hill Farm. There used to be a farm here, but now there is just a cow shed. The ancient oak was chopped down in 2010. The wooden barn has been gradually replaced by a metal one

St John's Cottage at the bottom of Bradley Hill. The picture on the left was taken in 2004 and the one on the right in 2008. It shows the right hand cottage  following an extension

Hill House - In 1971 and 2002. The original building is one of the oldest buildings remaining in the village

The Windmill stood at the top of Bradley Hill until 1949. It wasn't used after it was struck by lightning in  1908. There are no visible signs remaining 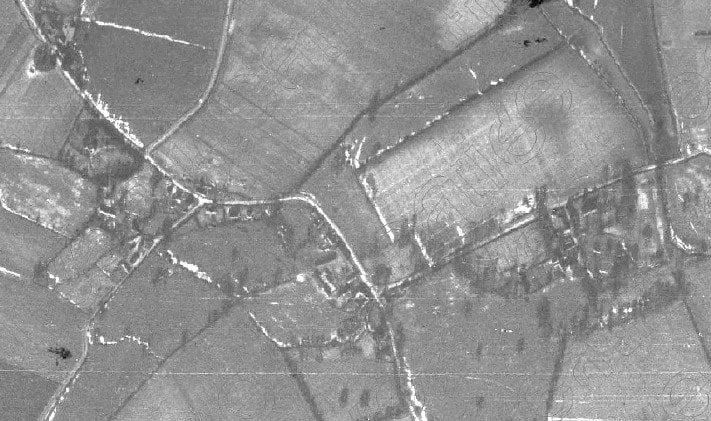 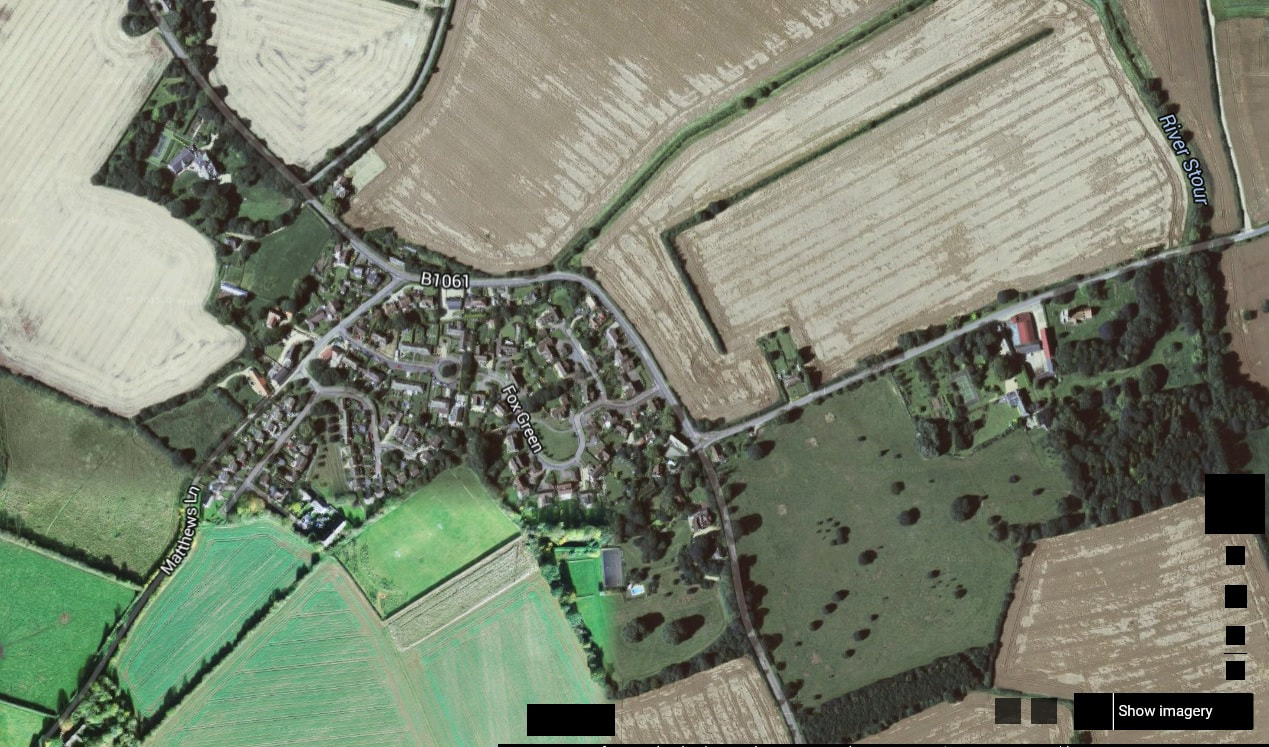 The Old Rectory In the Victorian/ Edwardian era and in 2015

Water Field Barn, Water Lane. The first picture is from 1999 and the second from 2004 after the barn was converted into a house

Main Street. View from outside Crown House 1969 in the snow and in 2005. The petrol pumps are long gone

Crown House. Looking down the main street, 1969 and 2005. The petrol pumps are replaced with recycling bins

The picture on the left shows Crown House decorated for King George's Silver Jubilee in 1937.

Message reads -        Dear Edie, We are coming home Sunday morning. we have had a lovely time and nice weather up till now. This is Aunt Sophia's house, thought you would like it. Shall I see anything of you Sunday ?  With love to all from your ever loving sister   Jessie.

This shows Crown House as a private residence in 2004 and 2007.
Crown House has been a pub, a garage and a shop. Click here for more information on the history

St Osyths, on Evergreen Lane, when it was the village shop, and in 2010

Another view of the old shop from 1954. There is a nurse leaving the shop pushing a 'Silver Cross' pram.
Yew Tree cottage in the background comprised three seaparate cottages at this time (see the three doors).

Main Street. Looking north towards Newmarket. The village shop can be seen on the left.  In the image one the left Crown House is a petrol station and a petrol pump is visible. There is a group of children standing in front of it and what looks like a flag planted the junction (a warning of roadworks taking place?)
Main Street. View down the main street from the junction with Evergreen Lane, 1950 and 2005. The cottage on the corner was knocked down in the 1970s. To see the sequence of it being knocked down click here

Houses on the corner of Evergreen Lane and the Main Street, before and after the hedge grew up

Clare Cottage in Matthews Lane (right) was formerly known as Rectory Farm. It was burnt down deliberately in 1982

This old farm house, which the tithe map of 1842 shows as being owned by George Smith, Corn Merchant, is surely one of the gems of the village. It has a large cellar (which is occasionally damp underfoot because it has a spring running up into it), complete with a-wine, rack; two staircases, one at each end of the house; six bedrooms, including two attic rooms each reached, again, by 2 separate staircases, one narrow and almost spiral. The Martins' present-day kitchen once housed a bread oven; the peel, the long-handled shovel used for taking loaves out of the oven, still exists. One cupboard halfway up the "spiral staircase" reveals another gem. The walls of this cupboard are papered with old newspapers dating back to the end of the Boer War, each item of immense interest, e.g. the mention  of Pretoria and the War nearing its end (1902), advertisements  for a set of dentures for 1 guinea or a single tooth for 2/6d,and Enfield motors and cycles. On passing from one bedroom to the next, one notices a cupboard in one corner. This cupboard reveals the bricks of the huge chimney breast, maybe 3'- 4' thick, which rises through the house. The wall at the back of the cupboard has been boarded over but, if this were removed, it would be possible to walk through to the next door bedroom alongside the chimney breast. This is evidence that the downstairs rooms must contain great inglenook fireplaces which, at this time, are concealed by comparatively modern ones although these, in themselves, are quite interesting as they probably date back to the turn of the century

Matthews Barn, before and after the conversion into a dwelling. [this section describes the barn in 1981]

From the front, the barn appears to be like many another old, black wooden building, but the view from the rear is truly surprising, for it is obvious that it dates back from centuries ago. It is typically Suffolk in character, with its  pitched roof and great high door. Inside, it is divided into two halves, with steps leading up from one half to the other. It is constructed of marvellously strong, old oak timbers, one of which has a carving on it.

The outbuildings, also at the rear of the house, again provide much of interest. The stables, which are unchanged, are divided into three - one for storing hay, one a manger and the third a stall. In the manger there is a strong old feeding trough which runs the length of the wall, and in the second an old, wrought iron hay rack.  The floor of the stables is made of small-hewn, oblong bricks, again a sign of the age of the building. Nearby, there are other outhouses, including a work- shop and a brew house. The workshop contains many interesting items - several pairs of shears with different shaped handles, oil cans, a large kettle stand, a scythe with its original thick» strong handle, obviously made from a branch of a tree as it still retains this shape, and a double Beatrice burner; this is really unusual - it is a kind of mini portable oil stove, used for cooking - the original of the present-day Belling stove. The brew house was used years ago, when everyone in the village came to brew their own beer if they wished to do so. In the yard there stands an old pump in perfect working order.

The whole building is constructed of intricate King Posts. The barn has three small, high windows at one end. The whole of this building is quite enchanting for it is in its perfect, original state.

Sheppy's on Matthews Lane in 2015 and the proposed new house

Evergreen Lane.
The image on the left is from the late 60's. The houses (to the right of the picture) were built in the 1950s and the bungalows (to the rear) were built later. A house was built in the garden of the first house in about the year 2000, and the tree was removed.

Aerial Views of Evergreen Lane & Clarendale.
The first picture from about 1968 shows the field at the top of the picture where the houses in Clarendale now stand, as shown in the top left of the second picture. The infill on Evergreen Lane can also be seen.

Prospect Villas, showing the extension to No.2. The first picture is from 1999 and the second from 2011. The house has already been extended by 1999 compared to No1, which hasn't been altered. They were originally houses belonging to the water board for their employees.
Bluebell Cottage on the main street, as it was and then, and in 2005 after it was knocked down and rebuilt

Main Street, 1880 and 2005. In the first picture Willow Cottage is the post office
Sugar Loaf: It was modified in the 1970s. The picture on the left shows Mr & Mrs Harry Balls 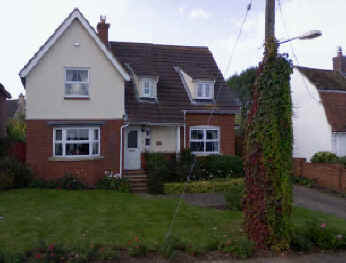 Cottage next door to (ie the left of) Sugar loaf: It is not there now as it was knocked down in the 1980s following a fire during restoration and replaced by Heatherfields.

Fox Green. This shows a plan of the Fox Green development which was built on the former Fox Farm.
This Fox Farm and Evergreen Lane and Fox Green and Evergreen Lane
This shows the entrance to Fox Farm (in the 70s?) and in the year 2000
The Fox Pub from about 1970 (note the sign is on the left) and in 1987, when it closed
The former Fox Pub as a private residence in 2005 and 2010. For more information on the history click here
Oak Tree at Fox Corner (top of Hall Road) from 2010 and 2017
Great Bradley Bridge, Hall Road. Showing the flood in summer of 1957 (approx) and in November 2016

The Postcard is stamped 22 Feb 1915 from Hampstead, to Miss Olieff [?]  Langley, West Hill, Putney Heath.
The Message reads -      Dear M. I am so sorry about Tuesday, but I am not allowed visitors, you will understand  wont you ? Some other time we must arrange for . Trust you are well.  With love A.B.

The Three Tuns pub at East Green. It has been extended and is now a private residence called Wychwood

Pond House - formerly The Thatched Cottage - from the Edwadian/ Victrian Era; the 1940s/ 50s amd the present day. The pond was once open for all the village to use.

The former Thurlow Hunt Kennels, now open kennels. The picture on the left forms part of the sale documents from the 1960/70s . The hunt kennels were built around 1886 by the then Master of the hunt Mr. E. Molyneux

Spring Barn Lodge - When it was two Edwardian Cottages, and after the 1970s conversion (taken in 2010) 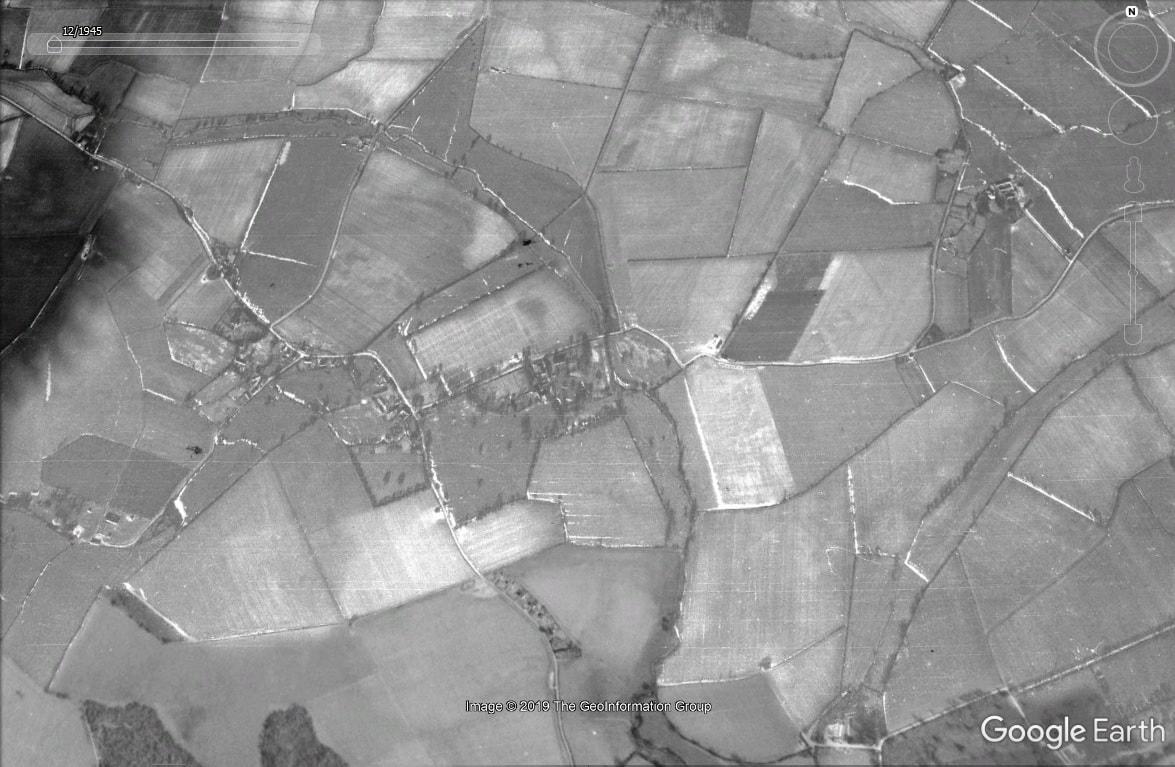 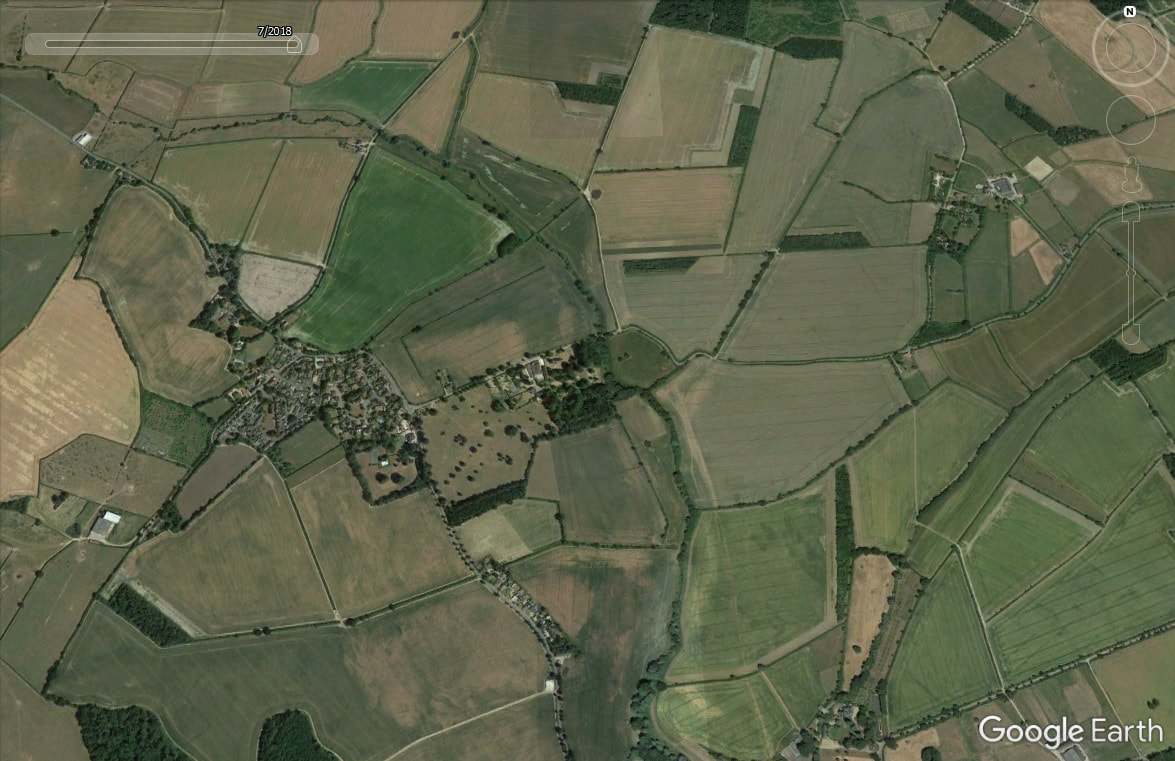