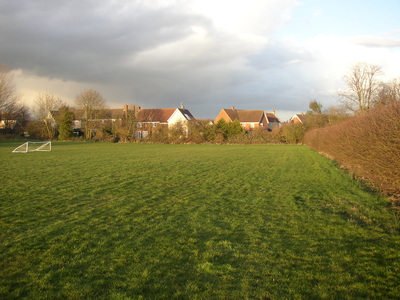 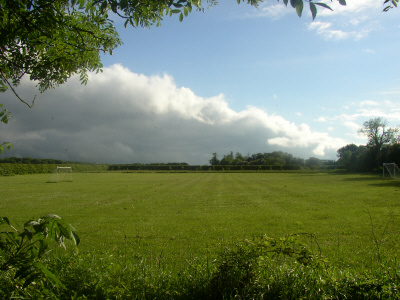 The Recreation Ground  was provided for the village as part of the planning consent for Fox Green. Perhaps it made up for the fact that Clarendale was built on the former cricket ground thirty years before?  It is  used mainly for dog walking and playing. The annual bonfire & fireworks used to take place here, but this has moved to Bradley Hall. Two football nets are provided by the Parish Council. A seat was installed and a grove of trees was planted in 2005 at the far (west) end of the field. In 2010 some play equipment was added and since then there have been some more seats added, a willow sculpture planted and some areas left to grow wild, to encourage bee orchids.

The Rec Ground was in the private ownership of the Ryder family/ Great Bradley Estates Ltd. In 2016/17 ownership of the Recreation Ground passed from the Ryder Family/ Great Bradley Farms to the Vestey Family/ Thurlow Estate. The owners are obliged to make it available for public recreation and cut the grass a certain number of times a year. The Parish Council helps pays for grass cutting beyond this minimum amount in order to keep the Rec Ground usable.There is a restriction  preventing the erection of "permanent structures" on the Rec Ground. This is normally taken to mean a building with walls and a roof.

St Edmundsbury Council has the Rec Ground designated as a Recreational Open Space on the Local Plan (the broad term “recreational open space” includes all formal and informal recreational uses of land, from football pitches to children’s playgrounds in parks). The map on this page is taken from that plan. The policies dealing with such a space are DS4, L1, L4, L5,  (Click here for more) and BSE2, RA4 (Click here for more)

The other areas marked in green in the village are designated an Amenity Open Space (An area that is primarily of visual importance but may also be used for recreation, either formally or informally) and covered by policies  (DS4, L4, L5, L6) (Click here for more)

The ditch round the side of the Rec Ground is a designated water course. It only takes the water that drains off the field. It feeds into a pond within the grounds of Pond House 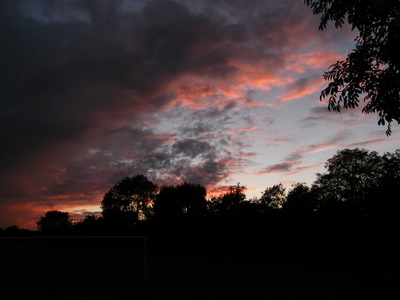 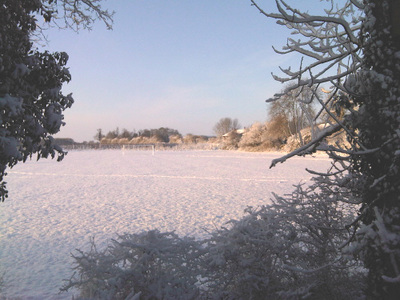 The Great Bradley Grove was planted in January 2005. It is a plantation of native trees at the far (western) end of the Recreation Ground. The Stour Valley Trust was consulted on the appropriateness of species to be included and about 225 small trees (or whips) and 25 larger saplings were planted out. It was first raised as a project to commemorate the Millennium. The cost has been funded by the Parish Council and the Ryder Estate. Sue Sylvester-Bradley created the design and the planting was completed by Rod Pass from the neighbouring village of Thurlow and his team, Gloria and Tony. It took most of the day on a rather damp and windy January 17th 2005 (Click here to read about Rod's work as Head Forester on the Thurlow Estate).

The term 'grove' was chosen because the 1:250 000 map showed a great many small pockets of woodland in the area being called grove, rather than say copse (Click here for the map). The dictionary says the term grove can be a woodland with a path through it for walking. This grove has certainly been designed to allow access through it for the local residents to enjoy in a few years time.

The 25 standard trees are of 5 varieties:

The other 250 shrubs are tiny plants at the moment but we hope most of them will flourish with just a little attention and care. The mix, all found locally, is made up of:

We hope, as time goes on, to introduce further plants but intend that these will also be native species in keeping with natural woodland. So, for instance, just one specie of aconite or snowdrop and proper English bluebells, not the Spanish ones that are often offered today.

There is a wide curving path through the grove which will be kept mown so you can enjoy a walk between the trees as they grow. Do go and see the new plants but take care especially with dogs, toddlers and runaway balls, the little plants and their shelters (to protect them from the elements and from being eaten by deer and rabbits) can easily be knocked over or uprooted.

These pictures and video show the grove in 2007 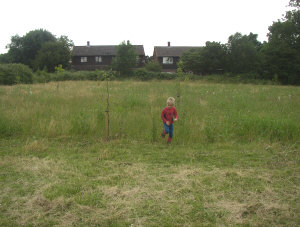 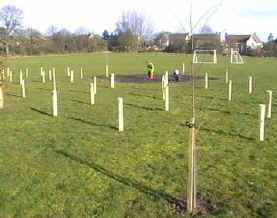 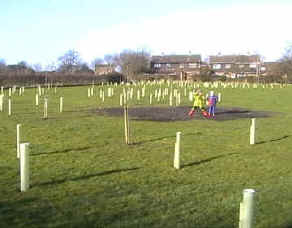 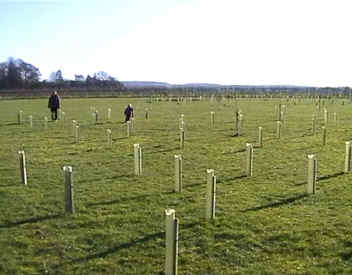 The pictures below, from 2020, show how the grove has grown in 13 years 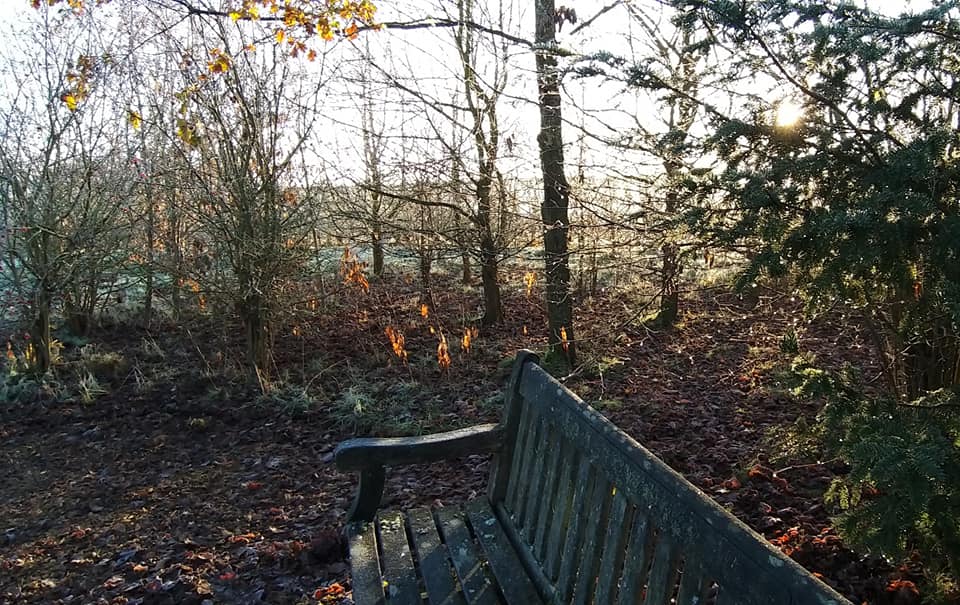 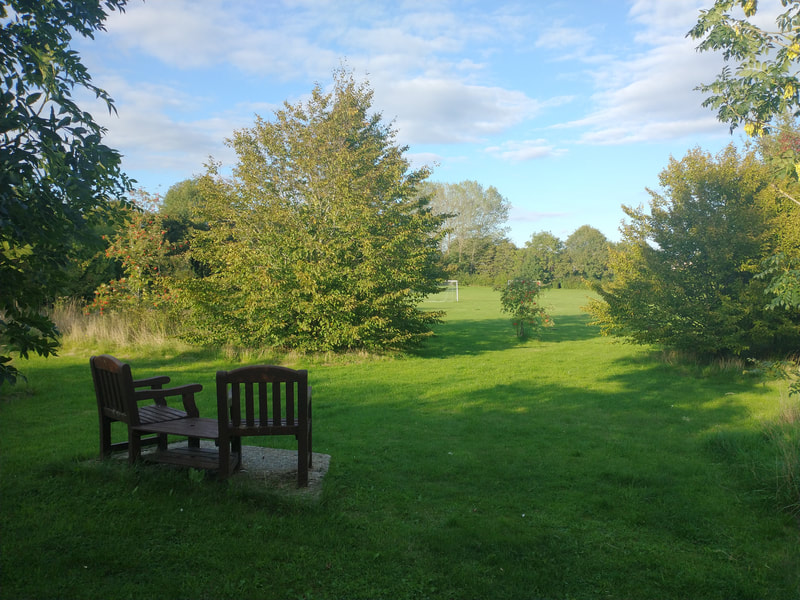 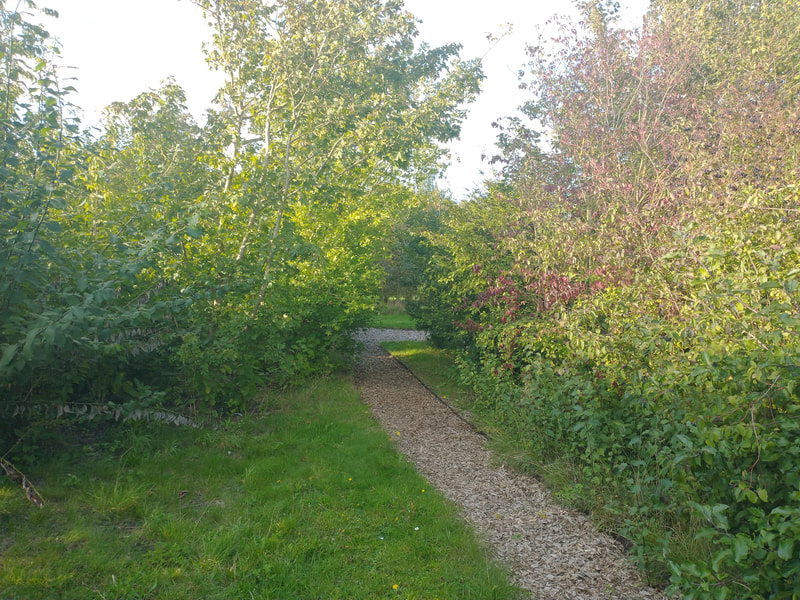 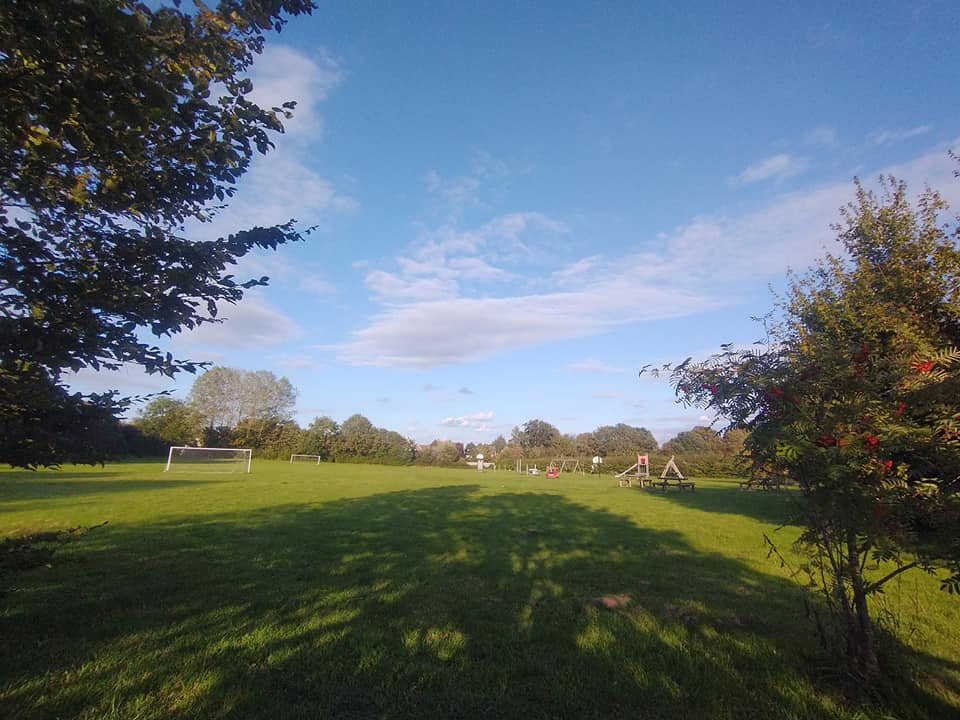 The addition of the play equipment brought about a big change in the recreation ground. It was purchased through fundraising in the village and through local grants. It is made predominantly of wood, to blend in as far as possible with the natural surroundings 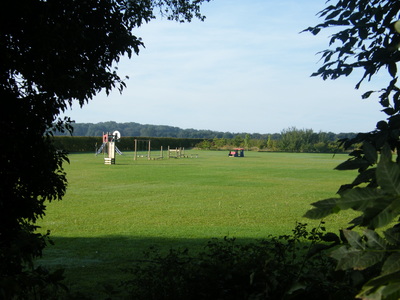 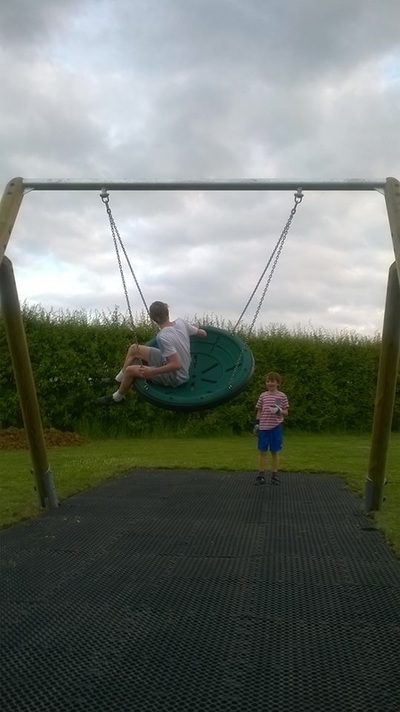 In early 2019 the Parish Council had been successful in obtaining substantial grants from several organisations and the result was that on 21st March Sunshine Gym (Broxap) will began installing 5 splendid new pieces of outdoor gym equipment on the Recreation Area. It took a whole day to dig out for the concrete basework and embed the steels for the equipment to attach to. Afterwards,the equipment itself was installed. There was then an opening ceremony at 3pm on Saturday 24th March when Harvey Leadbeater, a local personal trainer, kindly agreed to demonstrate the equipment and cut a ribon to open the area. Refreshments were provided at the ceremony. 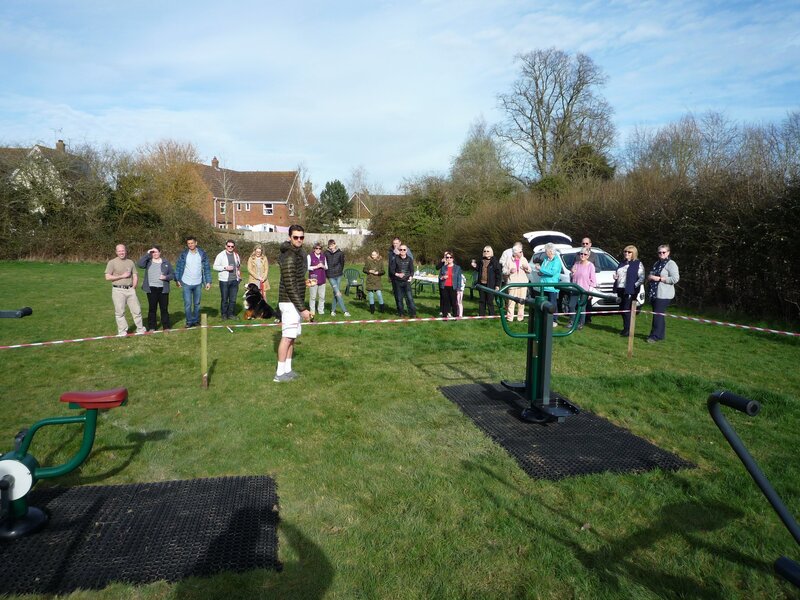 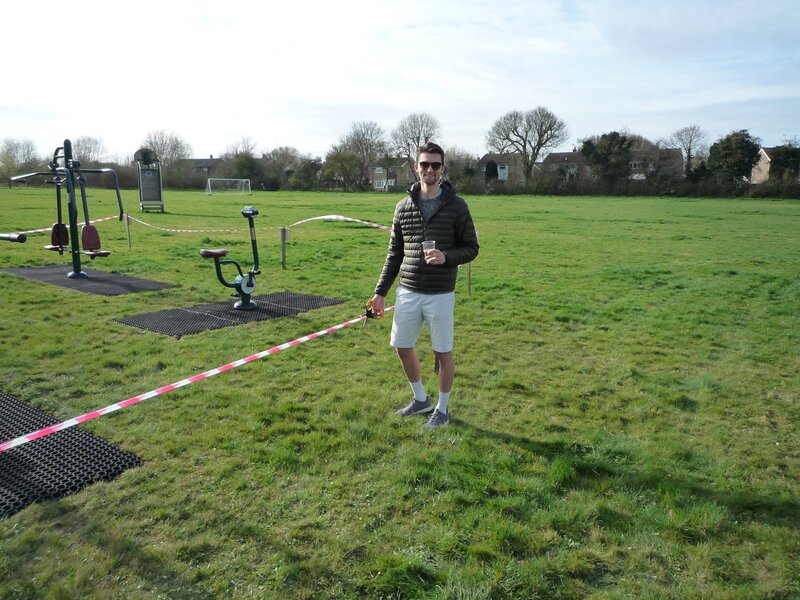 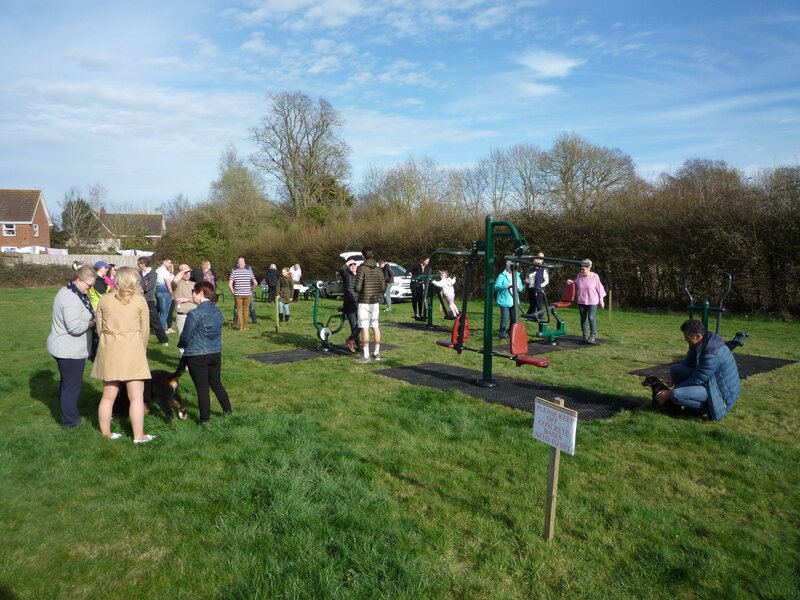 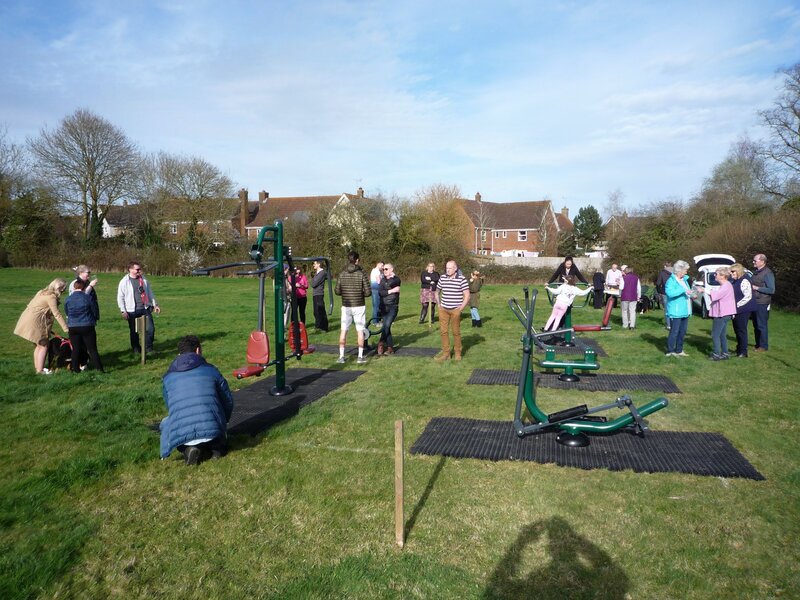 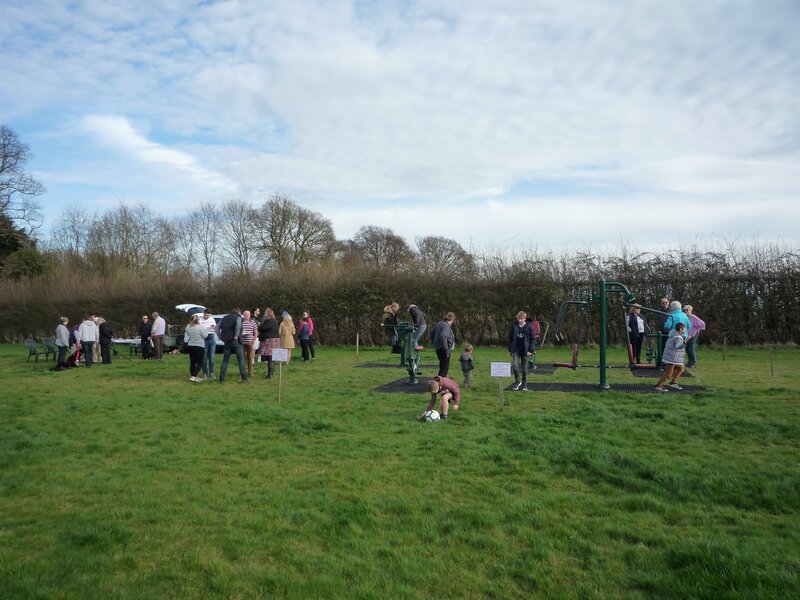 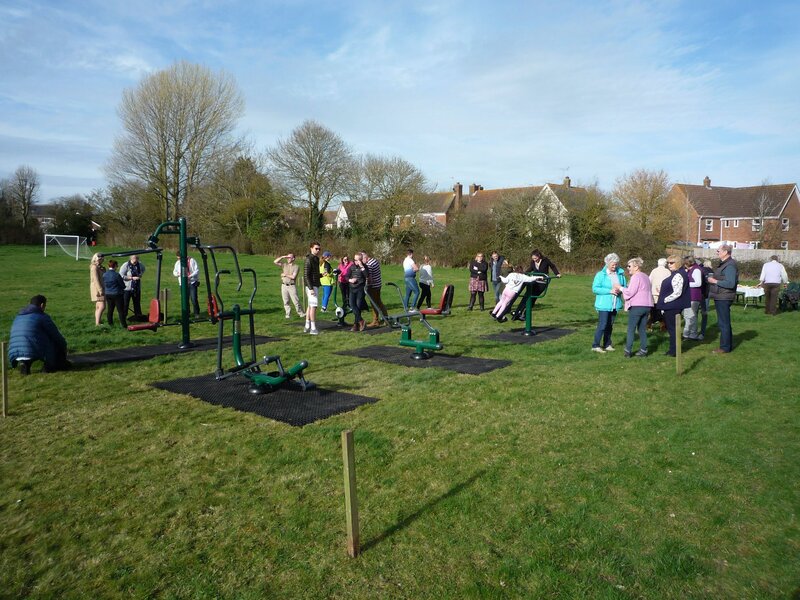 - A living willow sculpture was added in 2015. This is in the form of a cave or den that small people can enter (or big ones if they crawl). 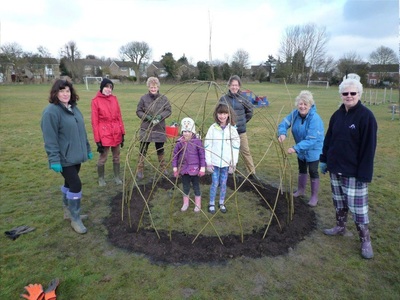 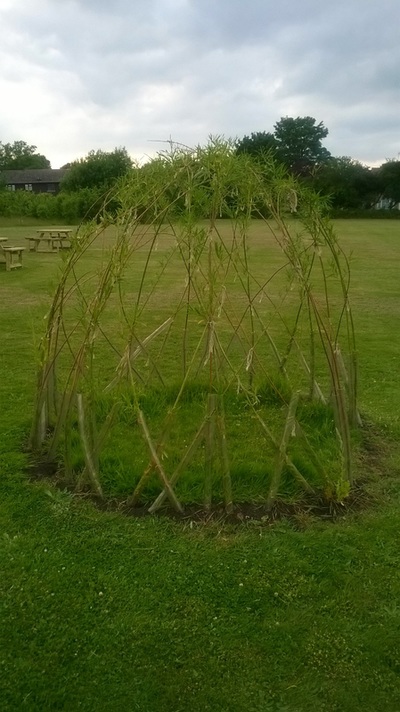 Each year, some patches of the main field are left uncut so that bee orchids can flourish. 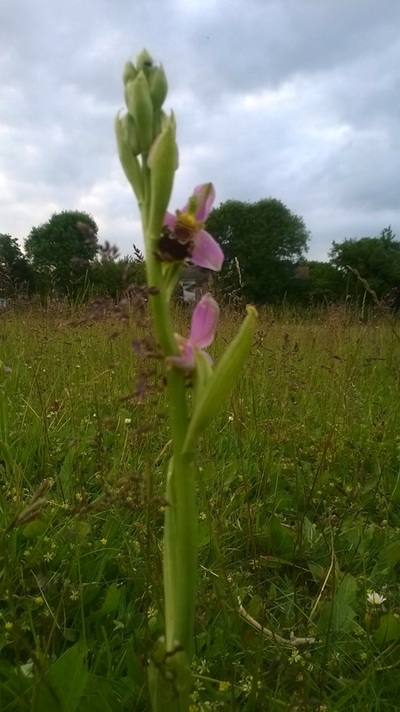 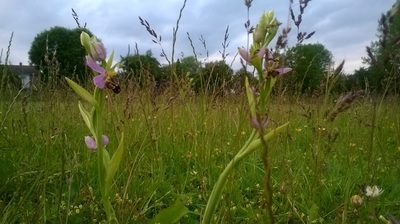 One is dedicated to Stephen Ryder, formerly of Gt. Bradley Hall great supporter of development in the village for the benefit of residents.
The other is to Jean Russo. She used to live in Great Bradley but moved to Italy. She always loved the village, so after she died in 2014 he husband contacted the parish council to see if a this dedication could be made in her memory. 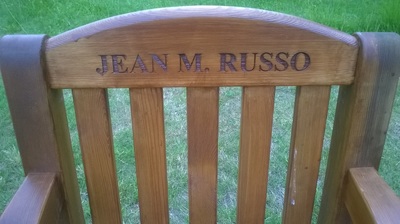 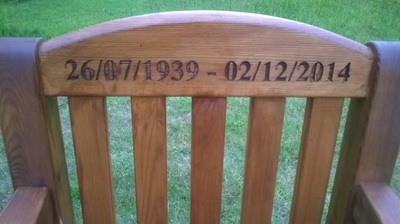 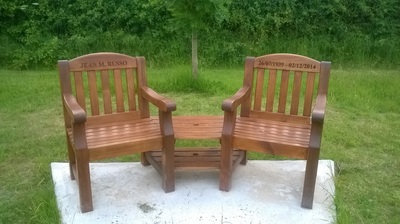 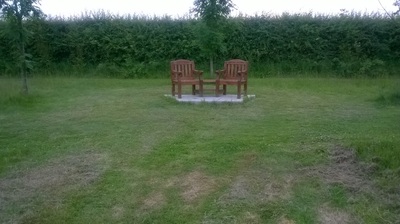 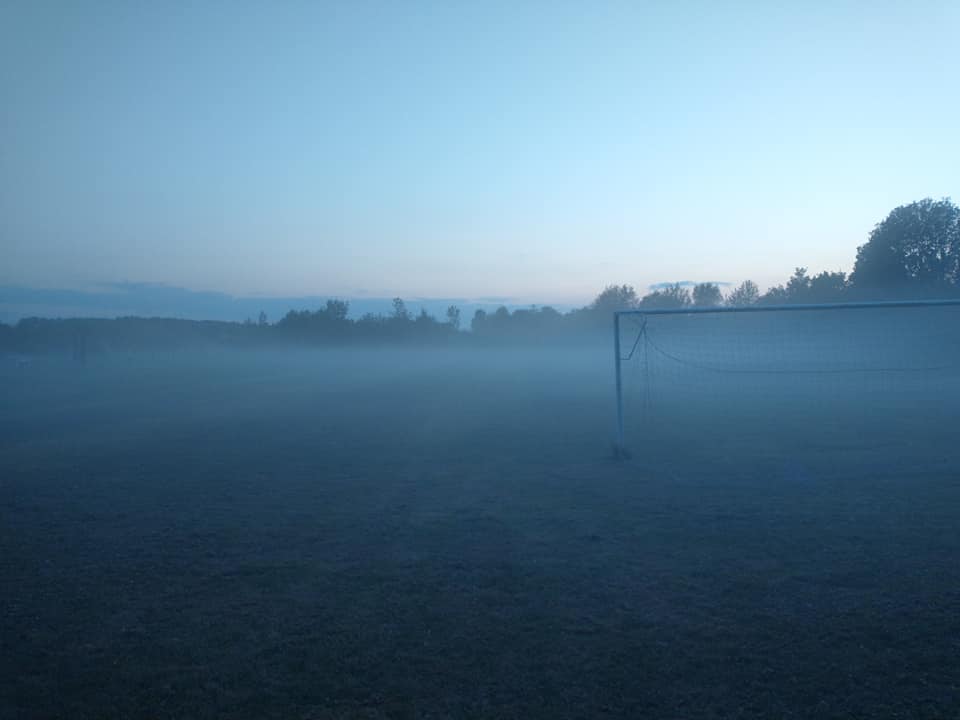