You step into a light, white interior. A Perpendicular arch divides the tower from the nave. The chancel arch has a plain and pointed head, but its jambs are Norman and the later arch rests upon Norman imposts. The nave is fitted with simple but very tasteful modem benches. The floor has been cut away to reveal the stonework at the base of the arch. See here for more detail on the Norman architecture of the church.
For more photos and documents related to the St Marys see the Great Bradley Church Archive 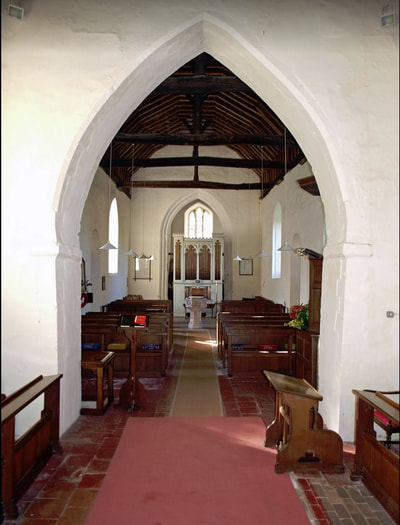 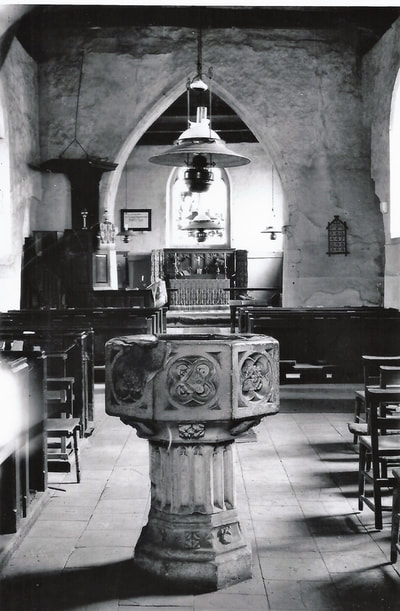 In the north east corner is the a fine 18th Century pulpit, complete with back board and sounding board. This used to be a two-decker pulpit, but its lower stall has now been removed.
The nave roof contains much of its original timber framework and is supported by four old tie-beams with king posts. Two more old tie-beams, and one modern tie-beam, support the modern roof of the chancel.
The church has a small, but beautifully toned organ. This instrument is of considerable age for a village church and was built by Gray of London in about 1820 (according to the church finance record). It was moved here in 1960 from St Andrew's Church in Walberswick, Suffolk when they installed a newer organ. The church finance record shows that it was given by the 'Misses Collins of Kirtling and was installed with the help of a Mr Ince'. It has five speaking stops. For more information see the National Pipe Organ Register 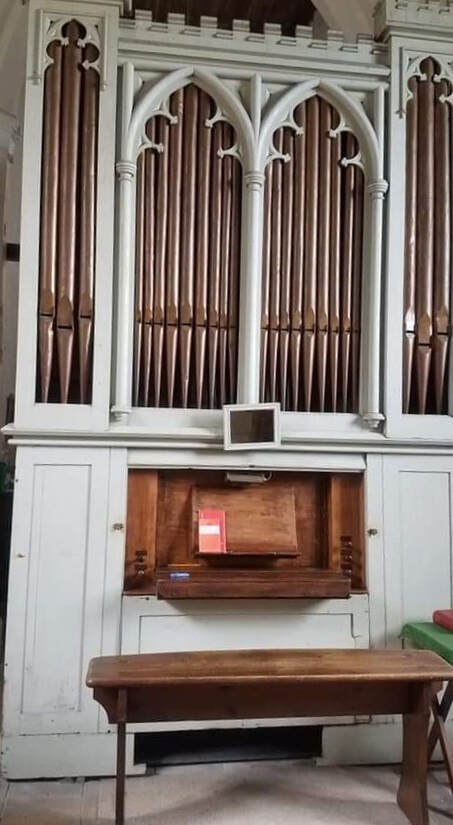 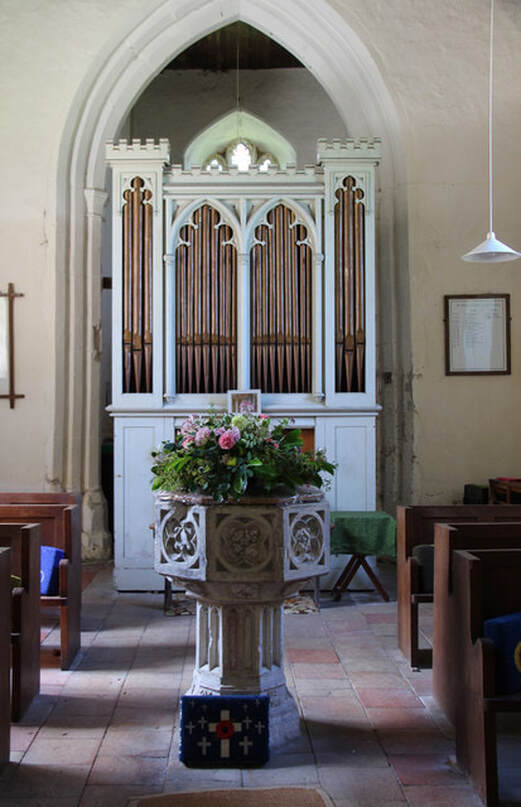 In the north wall of the tower is a fireplace. The outlet for the smoke can be seen in the exterior wall, some 16 feet up and covered with a stone baffle.  It is suggested that it might once have been used for baking the bread used at the Mass and I can only find reference to 4 other churches with this provision - one in Kent and three in Norfolk. There could be other reasons why you might have a fireplace beneath a tower, especially if it had been used as a vestry during the 17th and 18th centuries (e.g. warmth). However, it does appear to be part of the original fabric of the 13th century tower.

In the sanctuary, at the eastern end of the south wall there is a very fine 14th century sedele, which has a trefoil-headed ogee arch, resting upon semi-circular pillasters with moulded capitals and bases. Above it is a hood mould, which terminates in a foliated finial and rests upon one remaining corbel head. Because the sedele is cut off by the east wall it is clear that the chancel used to be much longer. If so, there was probably more sedila and piscinae along this wall (it was usual for there to be the three seats, used by Priest, Deacon and Subdeacon in a High Mass). Clearly, at some point the chancel has been truncated, and the two upper seats and piscina have been lost. Parts of the string course around the chancel wall are probably medieval. 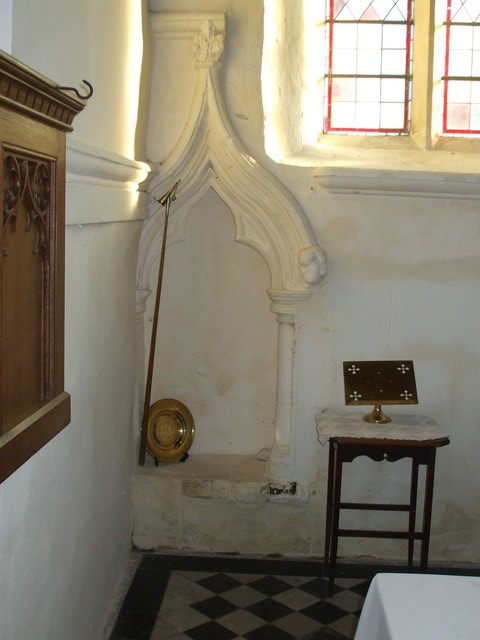 14th century sedele
Next to the rood screen can be seen a lower floor and wall. It has been suggested that this is the level of  Saxon church ~ but this is unlikely as there is no evidence for a Saxon church in Great Bradley. The Saxon church for this area was is in Little Bradley and Little & Great Bradley were not separated until the 12th Century, which is presumably why this church was then built.

Location of former rood screen
The Roll of Honour, commemorating all those who died in the First World War is a framed scroll on the south wall just inside the door. More information about the Roll of Honour 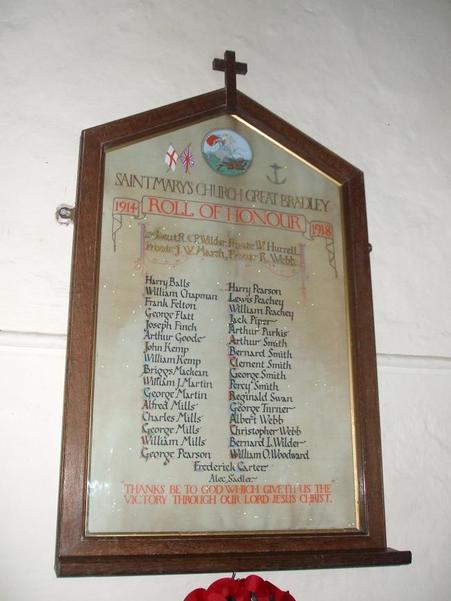 By the west wall of the nave, next to the organ is a funderal bier (a cart for carrying a coffin). It is dedicated as a war memorial to those men who served in the First World War, four of whom never returned. 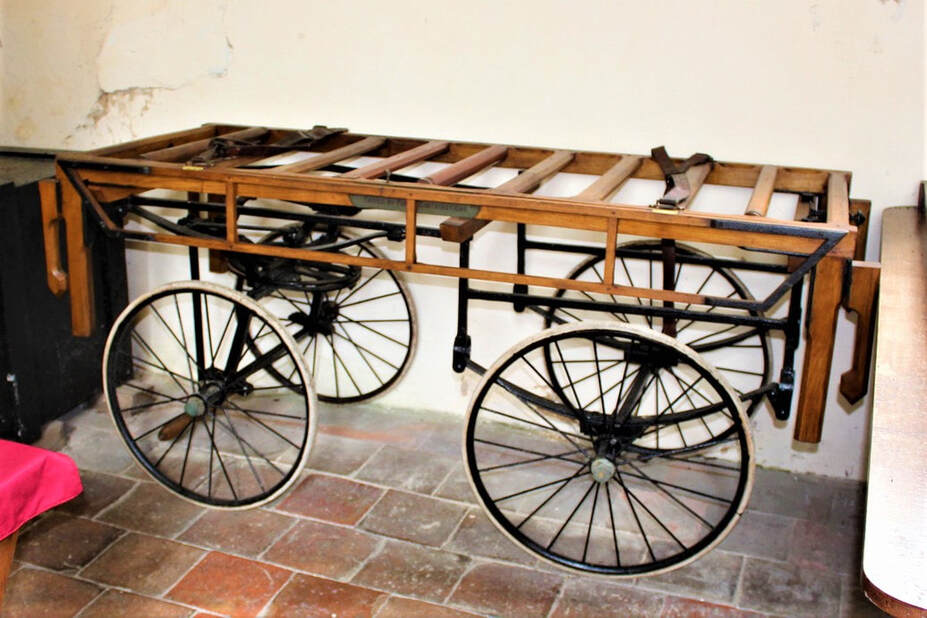 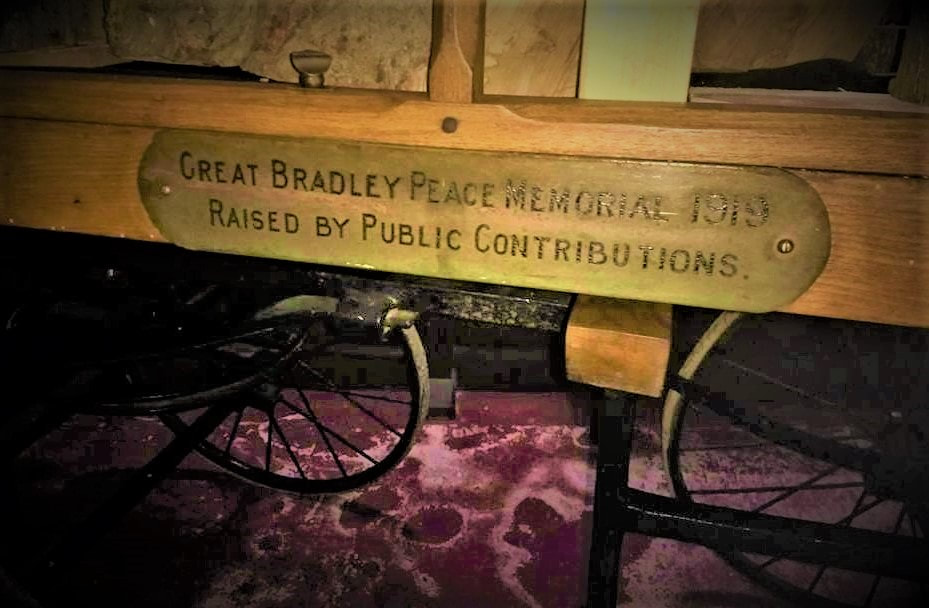 On the south side the only decorated window is dedicated to Frederick Webb and his wife Ida. It is from the 1950s and includes thatched cottages and what looks like a castle behind a nativity scene. See the main picture above and details below, including a small etching of a monk, showing that the window was made by the Whitefriars glass company.
On one of the pews in front of this window is a plaque commemorating the parents of Frederick Kent Long:
"To the Glory of Godand the memory of Daniel Kent Long &  Sarah Ann Bolding. These seats were erected by their sons and daughters"

Two other pews have dedications on them:
"To the Glory of God and in humble gratitude to Him for the deliverance of  Kathleen Wilder and Edmund Deacon from the perils of the sea. August 30th 1935. These Pews were the gift of the Parishioners, 1936" 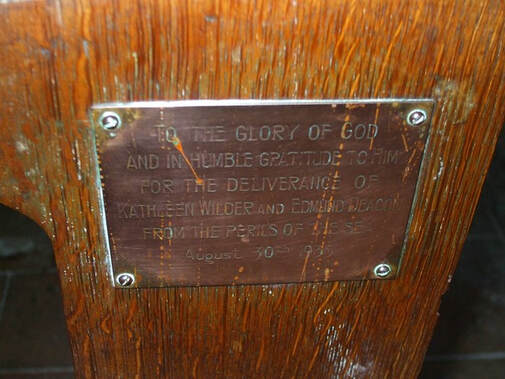 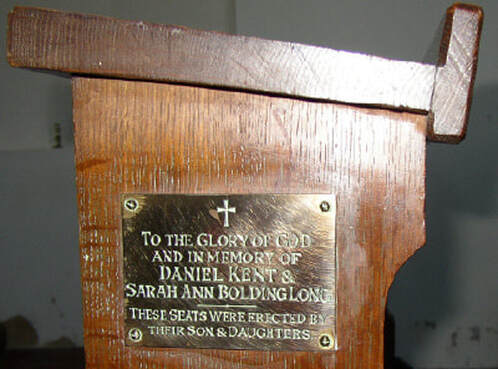 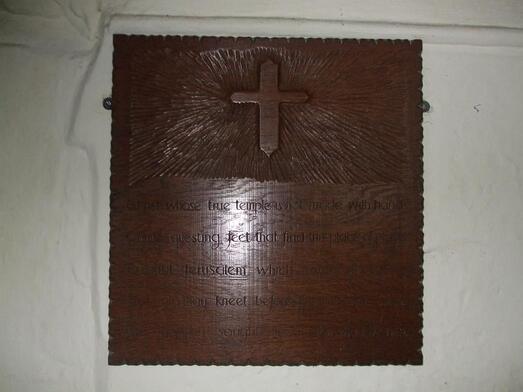 There are two ceremonial staves at the end of the two pews nearest the doorways in the nave. On top of each pole is a finial. The one near the north door is a crown and the one near the south door is a bishops mitre. They indicate allegiance to the crown (country) and to God.
On the south wall of the chancel is a wall monument, commemorating the Rev'd William Nash and his wife. He was Rector here and died in 1783. 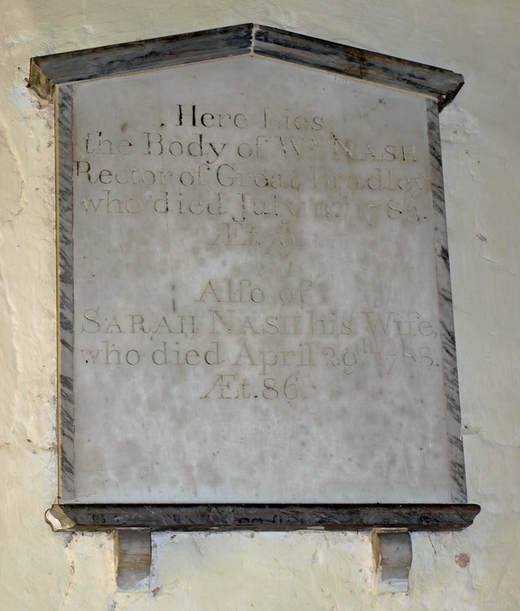 Other wall plaques can be seen on the north wall of the chancel, commemorating the four Wilder brothers - Charles, John, Bumard and Percival Wilder, who were all in turn Rectors of the parish, and held this living for a total of 74 successive years. The detail shows that the stonemason was Richard Arber, who lived at Windsor House at the top of Newmarket High Street 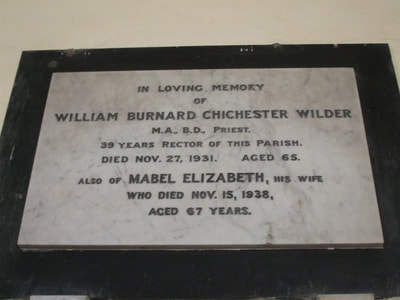 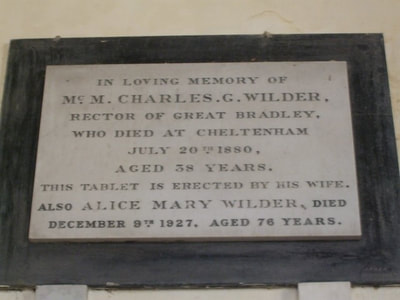 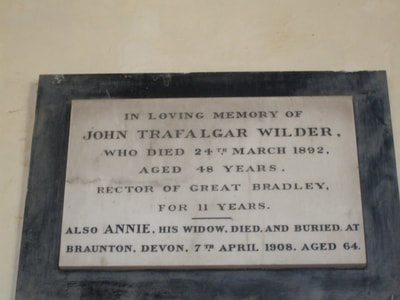 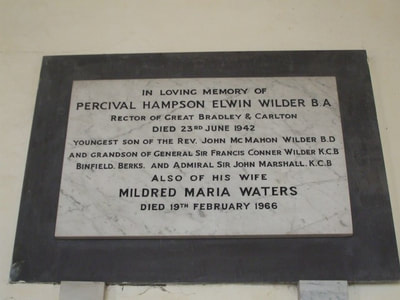 The standard for the church is in the Chancel on the south wall. 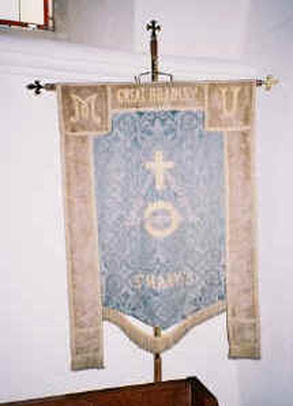 The octagonal stone font dates from the late 14th century. In the panels of the bowl are quatrefoils, containing fleurons. More fleurons and some shields are carved beneath the bowl. Around the stem are trefoil-headed arches and around its base are more fleurons. A careful look at this font reveals traces of original colour in the stonework. 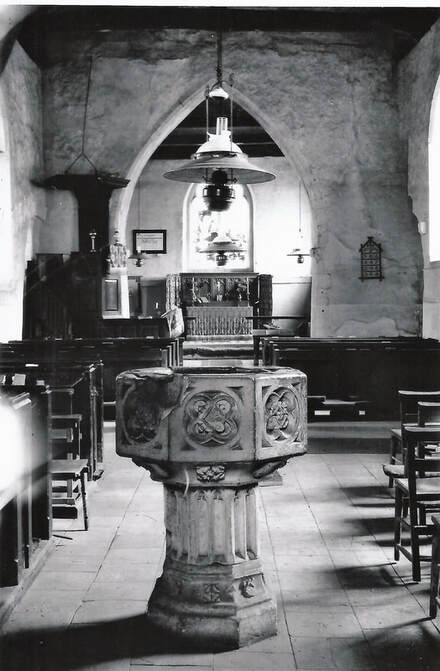 Interior of the church 1935 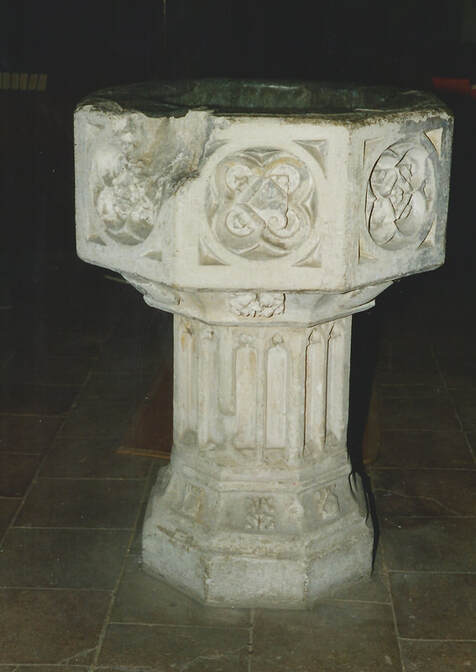 Near the west end of the nave, in the south wall, is a deep recess which may have been used as a cupboard in medieval times. 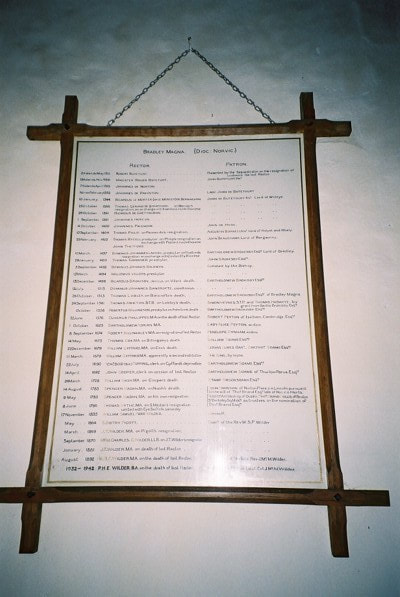 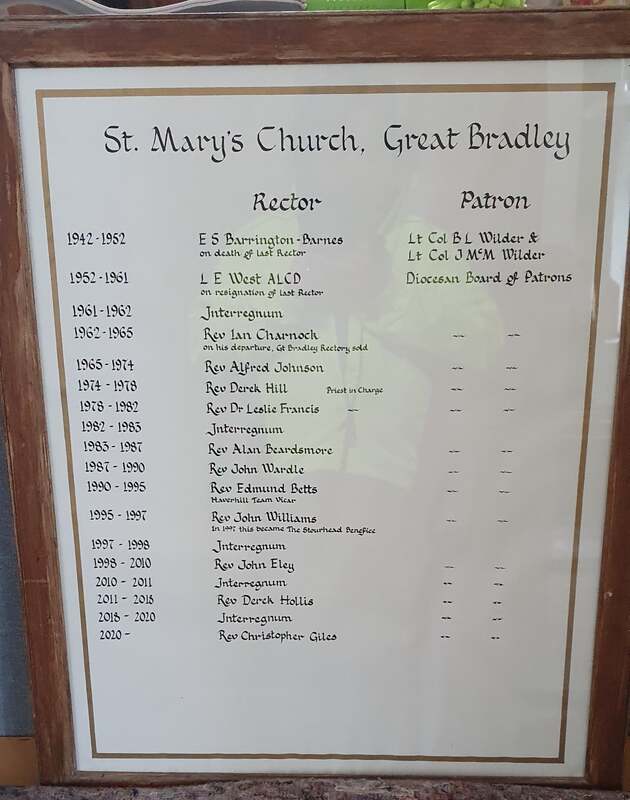 The eastern end of the nave has been cut away on both sides, presumably to accommodate a very handsome Rood Screen. Although nothing at all survives of the roodscreen or rood, there is ample evidence here of how it was placed. In both south and north walls alcoves survive, and clearly outline where the stairs were, where the rood beam was, and how deep the rood loft must have been. This must have been a truly magnificent affair and its loft probably extended well into the nave, with side altars beneath it. The rood loft stairs were probably situated on the south side, where the wall is cut away at a higher level. Perhaps the stone corbel on the south wall supported part of it. Certainly there were side altars as their piscinae can be seen in recesses in the north and south walls.
The altar is a Stuart holy table, which has been in use since the early 1700s.

There is a magnificent east window above the altar. John Seymour, in his 'Companion Guide to East Anglia' (Collins, 1970), says, 'There is some corking glass in the east window - of a Rupert Brooke-style young soldier in the trenches. It will be a collector's piece in fifty years time.'  The window is hauntingly beautiful and undoubtledy based on one of the most famous and popular works of art related to WWI, a painting by James Clarke from 1914 entitled 'The Greatest Sacrifice' and later named 'Duty'. King George V bought the original, which is now in St Mildred's Church, Whippingham, on the Isle of Wight, in memory of Prince Maurice of Battenberg who had been killed at Ypres. The war memorial in St Mary Magdeline Church in Enfield has a similar depiction as does the Carmichael Presbyterian Church in Regina, Canada.

Here, the window is dedicated to Rex Wilder who was killed in the First World War. Rex was the son of the Rev Burnard Wilder, Vicar of the parish at the time. His memoirs record how he received the news: "29. 11.1915 : On Monday, November 23. A telegram from War Office announcing the death of my 2nd son. 'Rex C.P. killed in action Nov. 19 1914, R.I.P.' Held a Memorial Service for the poor old fellow at 3 p.m. on the afternoon of the 29th. Church more than full. Service conducted by Rev. B. Fleming. May [Rex's mother], who feels the blow-terribly, still in bed with neuritis, but slightly better today".
Burnard performed the dedication ceremony for the window himself on on Whitsunday, 1919. In his notes he records: "During the week March 21-28, the stained glass East End window and stone work were inserted to the memory of Rex. Following this, on 28th March at Evensong there was a good congregation". 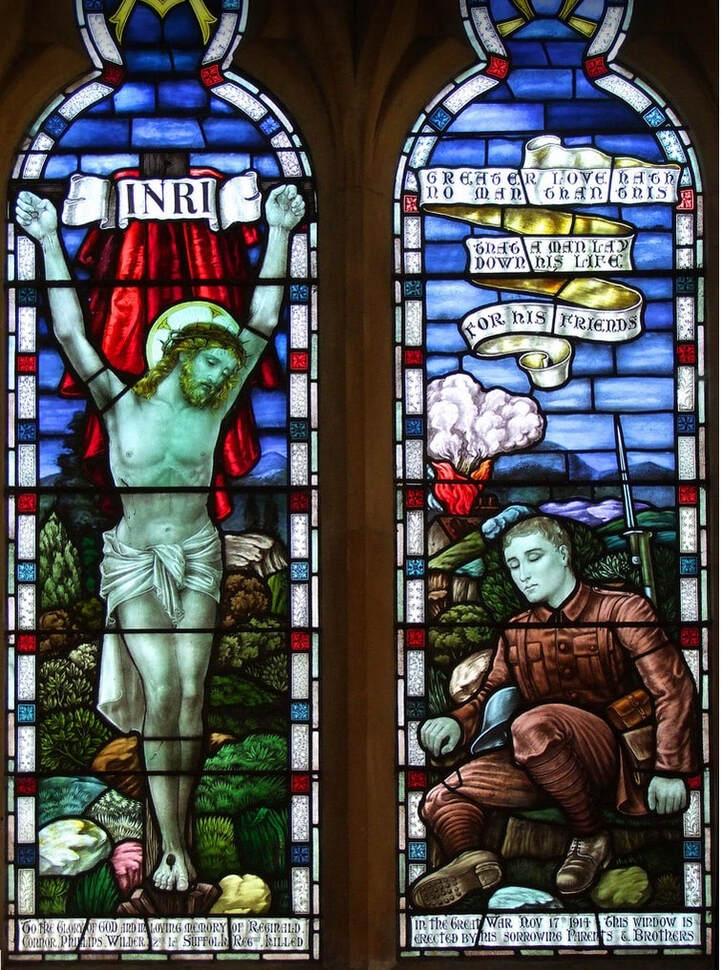 The floor of the altar is black and white marble, laid in a diamond pattern. It is dedicated to the memory of Burnard's parents 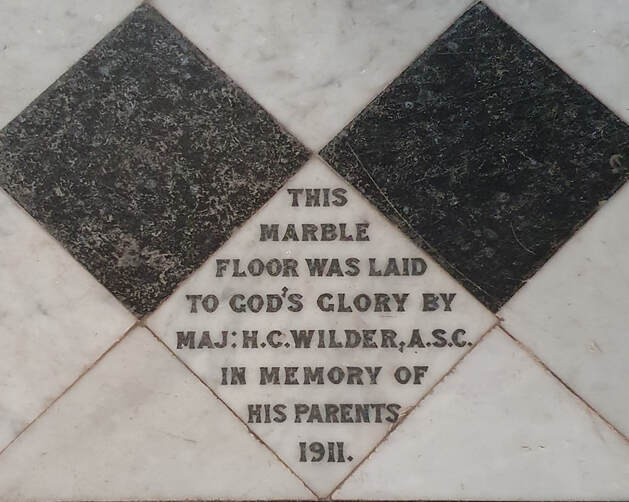 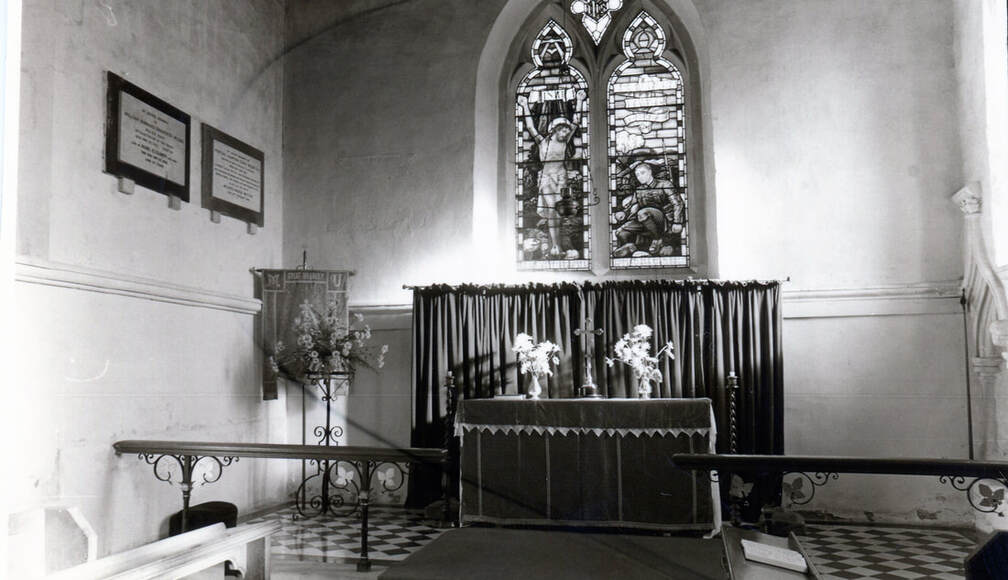 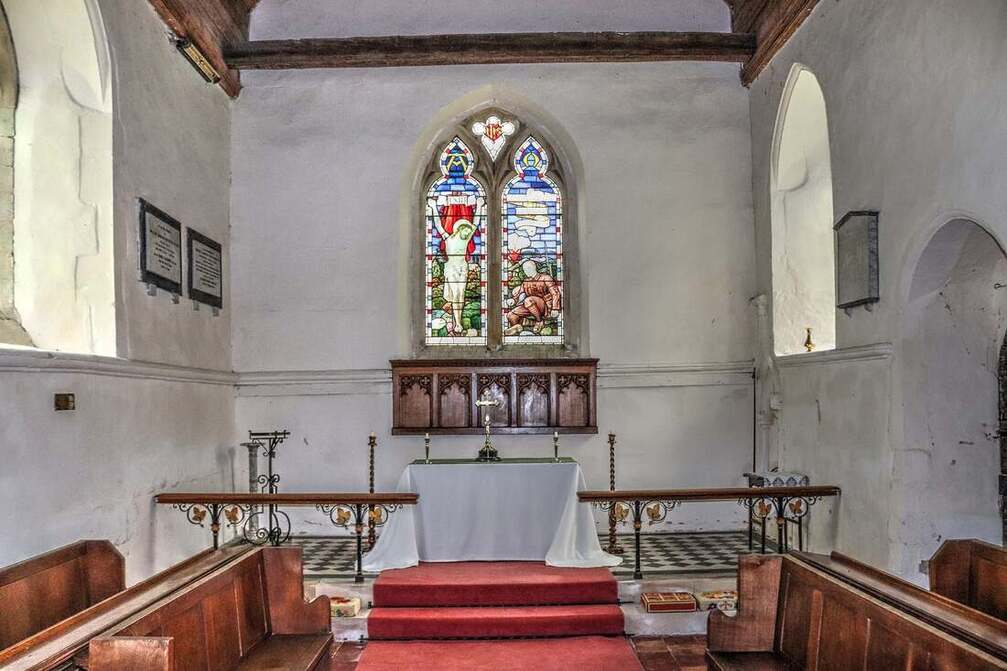