Click here to go the index of all the pages
Wednesday, 28 March 2007 A Wall Worth Saving

Unfortunately the building being rebuilt to make the new offices doesn't seem to be in tip-top condition.

This first picture shows the back wall, that hopefully can be incorporated into the new building. Judging by the timber used and the state of the rot it was probably built early in the last century.


The second shows the back of the wall with the struts that are keeping it vertical. Note the rot at this end. 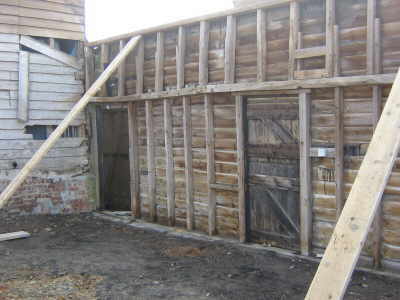 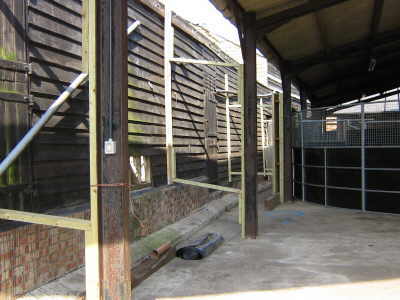 This picture shows us walking on the Devil's Dyke at Newmarket, with the July Racecourse in the background.
You tend to forget how long Newmarket has been involved with horses. The Dyke was built to keep the Southerners out of East Anglia in Saxon times. 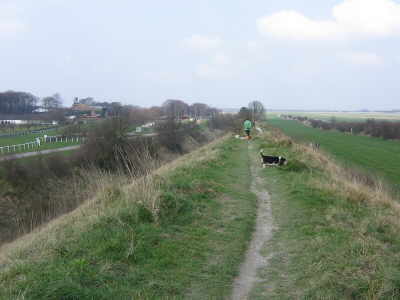 The first picture shows the nearly complete foaling unit. Note the grass and one or two details still have to be sorted.

The second picture shows the inside of one of the boxes in the unit. Note the wood and steel sliding doors, the camera looking down into the stable and the new roof. 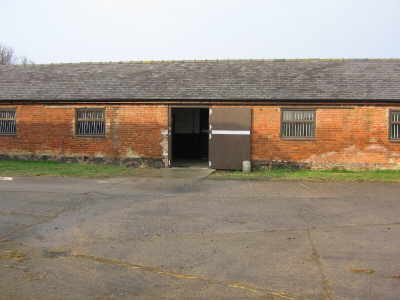 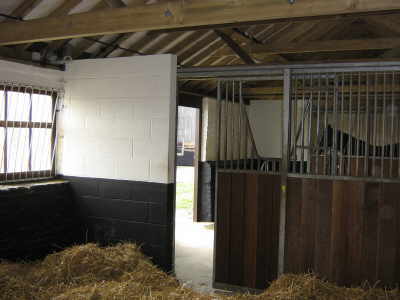 Today, I went up to the Royal Stud at Sandringham.

Now, I've visited many studs owned by the famous, the rich and the ordinary.

You don't really know that the buildings are a stud, as they're all hidden behind a long brick wall and it's only when you see this statue of Persimmon and see a tiny sign saying horse-boxes that you know you're there.

The Royal Studs don't do lots of expensive modern brick and are best described as functional, homely and professional. Half an hour after arriving, I was back down the road again to Newmarket.

The new offices are being built on the site of the old cart sheds. They didn't need much of a push to get them down.

As no-one was really interested in the great pile of fire-wood, it was taken away and burnt. 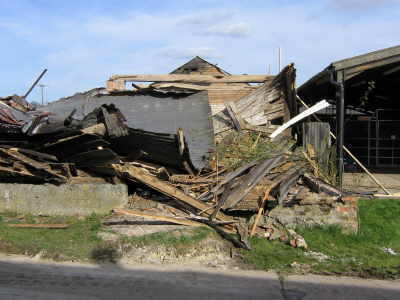 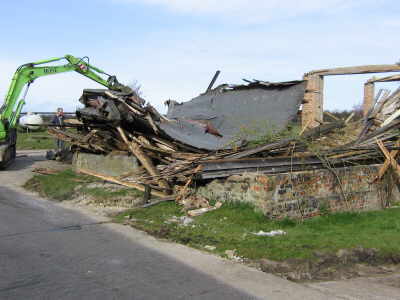 We have used LED lights under the eaves of the foaling unit to light the building.

They are more efficient and hopefully they will last a long time before they need replacement.

The lights are a set of three lights that we bought from Lighting Direct.

As you can see they are specified as being IP64 and are manufactured by JCC with a product number of JC71068. 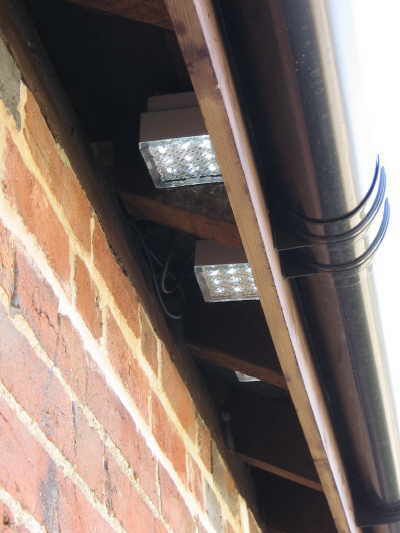 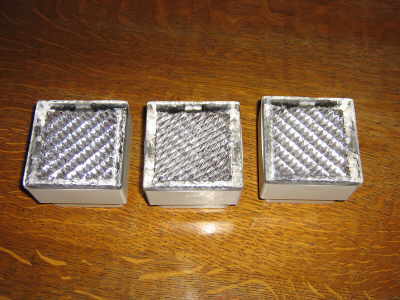 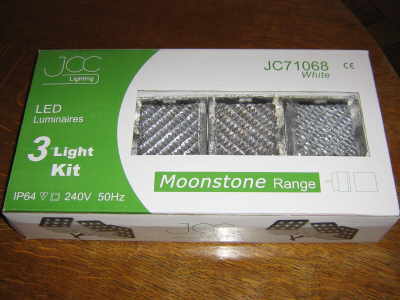 This is Lyndsey's temporary office, whilst the new ones are being built.

About all you can say for it is that it's blue 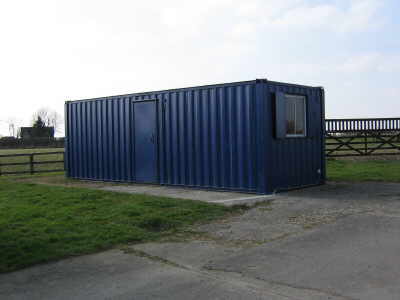 When we built the garage and boiler house for East Green Farm in 1992 or so, we didn't quite finish it off.

So here are the builders putting a proper concrete floor in. Hopefully, all the trouble we've had with nails left behind by the last set of builders will be buried under the concrete.

This is how it looked when the concreting was finished. 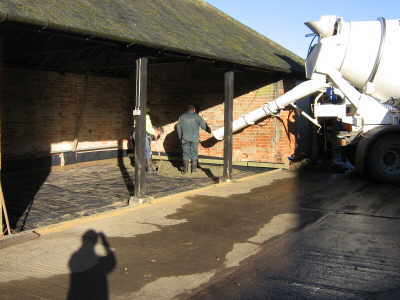 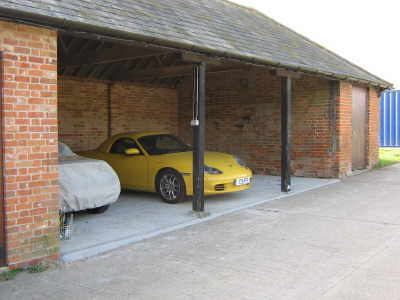 The software that comes with the network cameras allows you to take a video clip directly from the camera.
This is a mare and a three-day old foal on our stud, Freedom Farm at Newmarket in Suffolk, UK. The film was made on a Sony network camera with a fish-eye lens.

All of the cameras in the new building are connected to the stud network so that they can be viewed from anywhere in the locality on any personal computer.

The first picture, captured on my office computer, shows the image from one of the Sony cameras we have installed in a foaling box. This one has full infra-red and has been fitted with a fish-eye lens to get a complete view of the stable.

The camera is shown here. They cost around £200 each and are made to an IP65 specification, which basically means they are waterproof and dustproof. I wouldn't trust them to be steam proof, when you steam clean a stable, but they may well be. Note how it is angled down and has been modified by removing the cowl.

You will notice that in this case the camera is linked to mains electricity and also connected directly to the computer network that runs around the stables and offices. You can also link them to computers in the office using a radio link if this is more convenient.

The third picture s is another view of a camera. Note that here, the cowel has not been cut back.

I think it is true to say that the advantages of this sort of camera over traditionally CCTV cameras will increase in the next few years, as better software and more capable cameras are released into the market. 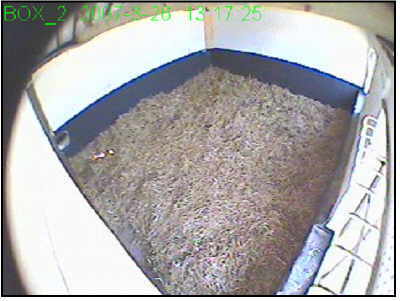 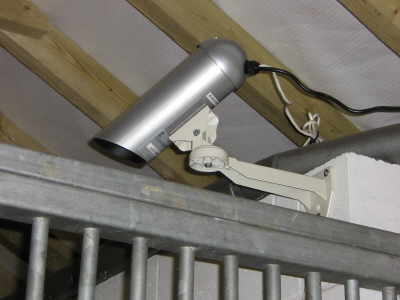 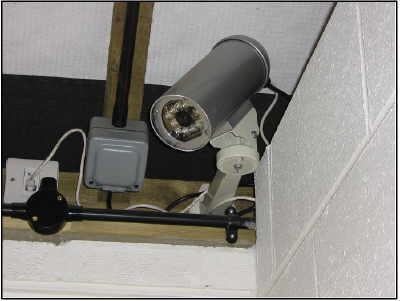