We have just returned from holiday and there is the deepest set of puddles we've ever seen at this time of year.

I hope global warming doesn't mean that we're going to be drowned from the sky rather than overwhelmed by rising sea levels.

Norrmally we don't get many starlings. But today, there was about a hundred on our front lawn. 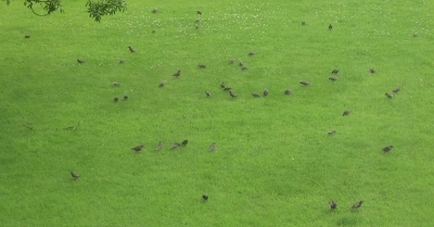 The Walls Are Almost Up

The walls are now at the height for the addition of the roof trusses. Note the wet walls caused by all the rain.

This view is from the back of the offices. Note how the stable door has been moved from the end. 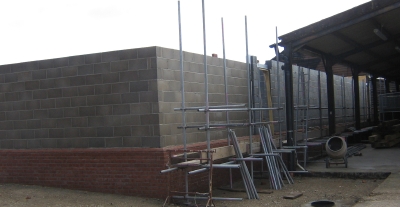 We often get seagulls in the fields, despite being nearly a hundred kilometres from the sea. But not often in the summer.

It just shows how wretched the summer has been

The trusses have now arrived.
They look difficult to handle, but each ways 74 Kg. 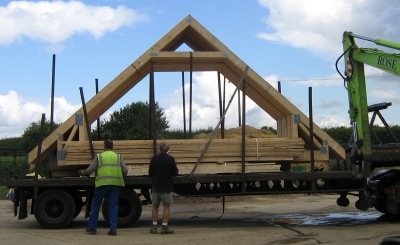 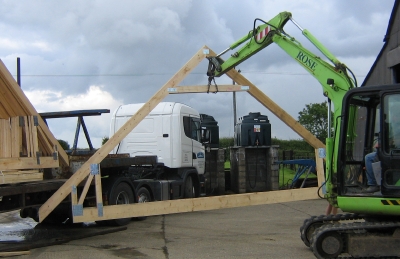 And Then There Were Four

There are now only four ducklings, but they are getting a bit bigger 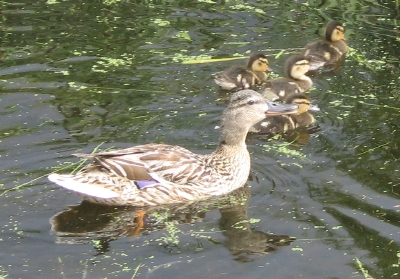 No Smoking Signs
We now have a ban in the UK on smoking in workplaces. Fine.

But I've had to spend fifty pounds or so on putting up signs to state the obvious. If I don't I'll get fined £200 for every non-compliance. Sounds like a jobsworths charter to me.

1. If we have a line of stables on the stud, like we used to have on the previous stud, do you have to put up signs on every stable door?

2. If you work for someone in their own house and they smoke, do they have to desist?

This could be a nightmare for employers, if the inspectors try to justify their existence and look for small degrees of non-compliance.
Saturday, 7 July 2007 Golden Panda Today is the seventh of the seventh and the seventh year of the new millennium.

In 1988 on a similar day, the 8th of August, our horse Golden Panda won at Nottingham.

Nothing that odd you might say, but that day was the lucky Chinese day and the horse was named after a Chinese Restaurant in Ipswich.

The Chinese apparently cleared out Ladbrokes in Mildenhall

Panda Power
Panda Power runs at Windsor tonight in the 8:20.


Dragonfly
This picture of a dragonfly over one of our ponds was taken today. 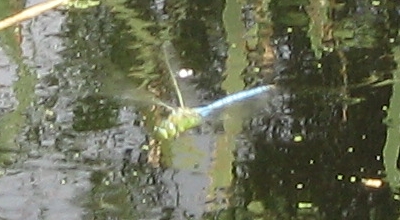 We had a fence by the side of the house that needed to be removed. The fence was typical post and rail, with the posts buried half a metre into the ground. Luckily they were not embedded into concrete.

A few months ago, I made a tool that you could use with a high lift jack to remove fence posts without any great fuss.

As an aside here, just try the normal method of wrapping a chain round the post and then using a tractor to pull the post. This method makes a lot of mess and is very dangerous if the chain breaks.

You start by just dropping the tool over the post (Pic. 1)

Note that there are no moving parts in the tool and it doesn't need to be adjusted. (Pic 2)

Note too, that the post is in pretty good condition. If the post has broken off at the ground as they often do, then all you need to do is dig a few inches into the ground so that the tool can grip the good part of the post.

The tool is linked to the jack using a shackle with a breaking strain of about a tonne and a half.

Note that the high lift jack is stood on a fence rail to equalise the ground pressure.(Pic 3)

Celia did most of the pulling for these posts as it's actually quicker if someone else (me) holds the post vertically. This just shows how powerful the jack/puller combination is. Note that little damage is done to the ground and in many cases a new post could be driven firmly into the old hole. (Pic 5)

The jack can also be used to lift the heavy gate off its hinges. (Pic 6)

This picture shows how easy it is to pull a post in a restricted space. (Pic 7)

The wall wasn't damaged or even touched.

In the end five fence posts and one gate post were pulled in about half an hour. (Pic 8) 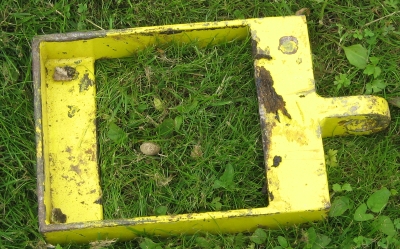 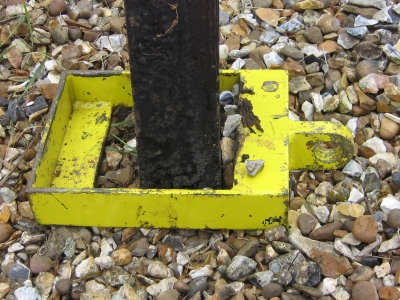 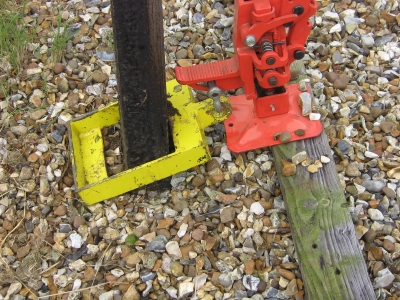 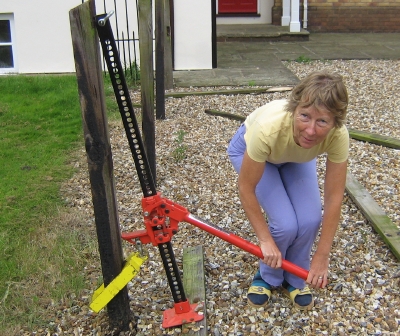 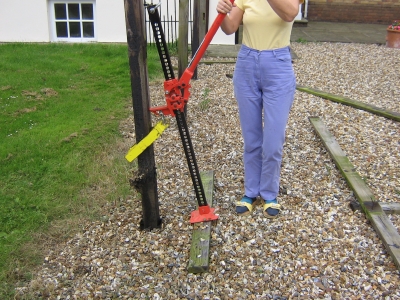 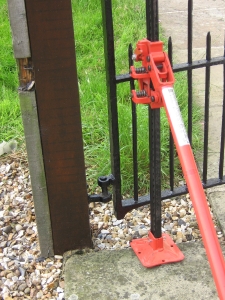 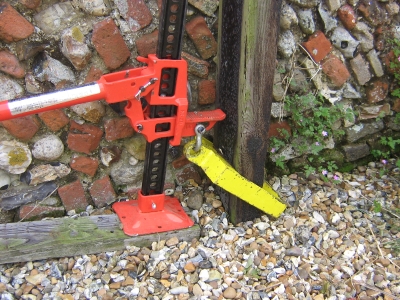 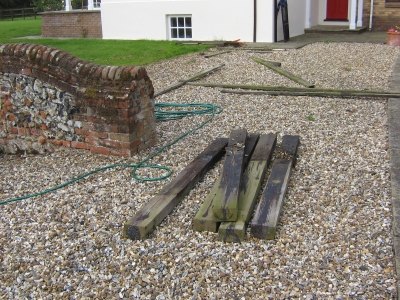 A friend's horse ran at Sandown tonight. We couldn't watch the race over the Internet (We don't have Sky) as we've signed up to At The Races rather than Racing UK.

Why isn't there one company?

Hares in a Field

We have lots of hares on the stud. I've taken a rather crude video of some hares. This was only taken on a Canon Powershot and I couldn't get any closer.

Hares are really the most majestic of creatures.

Urban Foxes Go to the Country

This is a sad tale.

Locally, someone dumped several foxes that they had caught in a town on a farmer's field near here. They thought they were helping the animals.

But they weren't. Urban foxes raid litter and rubbish bins and generally don't know how to hunt. They are just scavengers.

Here in the country, there is very little litter and all of our rubbish is securely stored in wheelie-bins. Even if we wait two weeks for it to be collected, there is no smell and certainly nothing for the foxes to scavenge.

So these poor urban foxes were reduced to begging as the farmer worked his fields and were grateful, if he threw part of his lunch from the tractor.

In the end they starved to death.

She's still got four ducklings. But why she has to go into the green slimy pond I don't know.

It's funny but I was on Hampstead Heath yesterday and the ducklings didn't stay close to their mother, like these do.

Perhaps, the country is a more dangerous place for ducklings than the town 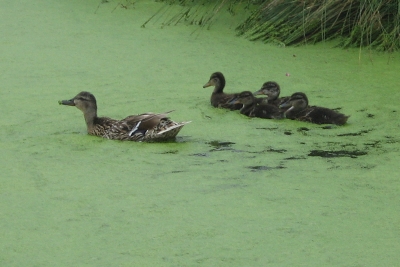 Ragwort poisons horses and cattle, but not sheep.

It is everywhere this year and I took this photograph on Newmarket Heath this morning. Councils are supposed to control it. Do they? 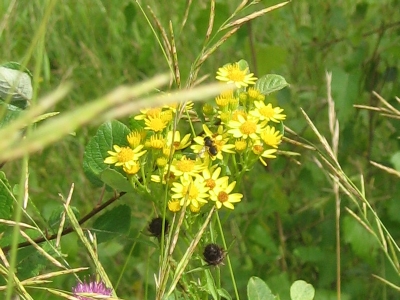 Two yearlings are being excercised on a horsewalker. They will go to the sales in the Autumn

The Finished Roof Frame  The frame of the roof is now almost complete and ready for the tiles. It's now starting to look like a building 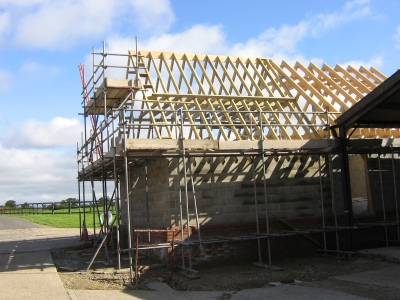 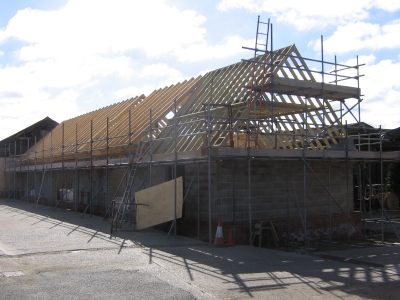 Alexandra Park racecourse was a unique track in North London. It closed in 1970, but I never went despite the fact that my father's print works was just down the hill at 38-44 Station Road, Wood Green (Pic 1 below)

The firm traded under the name of H. Miller and Sons. My father was the second of two sons of his father Herbert and his mother Margaret. I never met Herbert as he died in the 1920s, but I can remember my grandmother well. She used to sit me on the ledgers so that I could watch the trains as they ran up to Palace Gates station, which like the racecourse is long since closed.

I suspect that their office with its Imperial typewriters was perhaps the third and fourth windows from the corner of the building. The upstairs corner offices were occupied by a company called, Light and Power Accessories. You can guess as well as I can about what they did.

Underneath on the corner was a greasy spoon. Later from about the age of eight, when I used to work at the weekends with my father, I can remember going to collect the ham rolls for lunch. As I'm a coeliac, I wouldn't do that now!

I mentioned about Palace Gates station and the trains that ran there from Seven Sisters. If you look the other way from my father's works you'll see that the road dips (Pic 2). This dip was built to allow double deck buses to pass under the railway. A few years later Beeching abolished the railway. Joined up thinking? No way.


Looking the other way (Pic 3), you can just about see Wood Green Underground Station in the distance. On the opposite site of the road is the pub called The Jolly Farmers, where my father used to take me for lunch as I got older. You have to remember that many landlords used to let kids in (illegally) in the 1950s at lunchtimes. This stopped as the authorities got more strict. It's funny how we've had to legislate to get back to the status quo.

Before the Second World War, my father had a strong connection to the racecourse. He claimed to have been involved (and subsequently warned off) for running a horse, which was supposedly owned by an Indian Maharajah. They used to paint a blaze on this horse with Meltonian, so that everybody thought it was something else. (With proper passports and electronic chips, this shouldn't happen any more.).

After the war his connections were more mundane. He would have the odd bet and the tricksters used to setup the Crown and Anchor outside the print works to prey on the crowds walking from the Tube to the racecourse. If the police arrived, the tricksters would just duck inside and put some money in my father's poor box. (I should say, that I had a maths teacher at Minchenden Grammar School called, George Bullen, who advised strongly against playing the game.)

I've only seen the game being played once since and that was on Derby Day, when Vague Shot ran in the Diomed about twenty years ago.

So what of the racecourse today. The course is still there and you can still make out its distinctive frying pan shape. But it couldn't be used for racing again, as all of the slope up to the Palace, which performed the duty of a grandstand, is now covered in trees (Pic 4). At least though, this historic London track is shown on the map of the park. 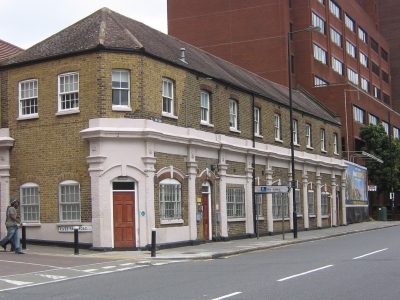 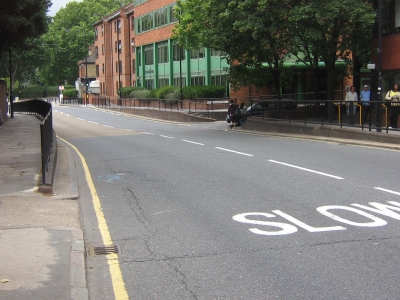 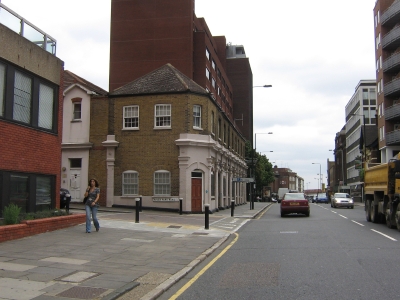 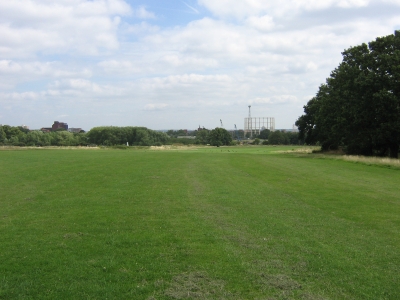 The Start of Autumn?
The start of autumn is always marked by the first ploughing of the land. we saw this as we walked towards Kirtling this morning.
It make you depressed to see it so early.

Lizzie and a Yearling

This is Lizzie having a talk with a colt yearling, who has been turned out in the outdoor school 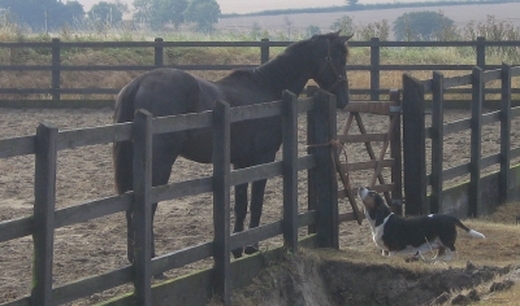 How to Recycle a Wheelbarrow

I don't know how many wheelbarrows have been used on this job. But it's a lot, as the brickies just leave them filled up with concrete and never clean them out. So they just go in tip.

One of the problems here is the price of wheelbarrows. They are so cheap now, that they are virtually a throw away product.

Perhaps we need a minimum price or how about a wheelbarrow tax. 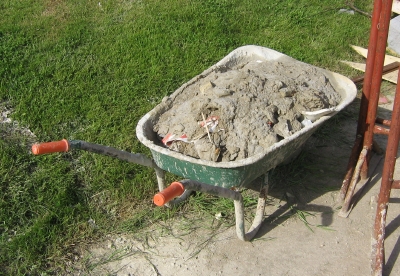 Our premises are protected by an Attack Cat.

She also tries to deal with all of those little furry pests, like mice and rats 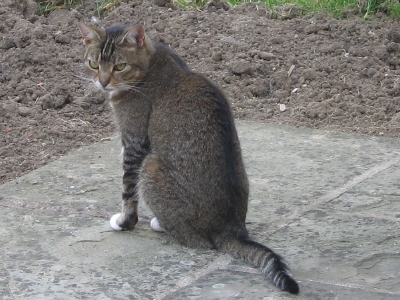 The roof insulation is now being added. It looks more and more like a building 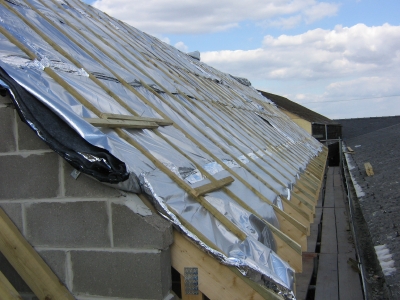 We have quite a few of these around the house and farmyard. 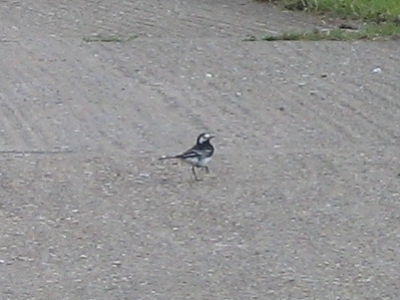