Tracks
The tracks to save the grass are now more or less complete. Or at least Phase 1 is, as I suspect, they'll be extended when we see which bits get worn. 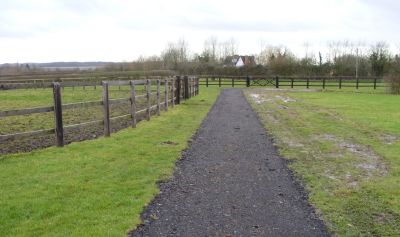 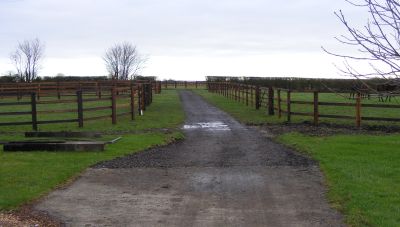 Milk It Mick is a stallion who for the 2008 season will be standing at Lone Oak Stud. This is our old stud and I walked across the fields with Anna to see his presentation on Sunday.
Wednesday, 5 December 2007

We are now using the golf buggy on a regular basis. Typically the longest trips the buggy does are the morning and evening feeds, when it probably carries two to three 25 Kg sacks of feed.

The first two pictures show it working much harder, as it carries about ten thirty or so kilogram sandbags, which are being used for a bridge. Note how down on the rear wheels the buggy sits.

Bear in mind though that total payload was about 300 Kg in addition to about 65 Kg of driver. So this is really only the equivalent of three averagely-obese American golfers.

The last picture shows the bridge being completed. 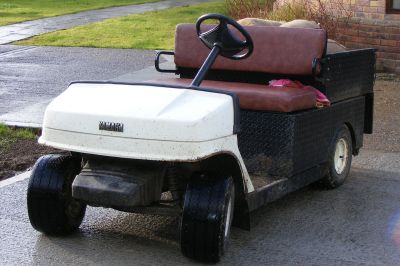 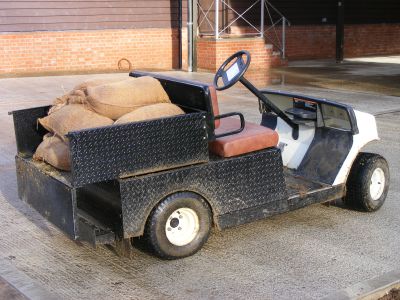 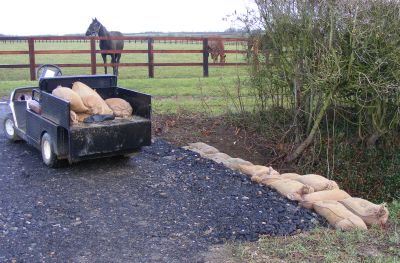 Celia
Celia finally succumbed to her cancer at one fifteen this morning.

Yesterday, Henry, our middle son, and myself had lifted her from her bed at home with its beautiful views of the Suffolk countryside and sat her in a comfortable chair. Most of the morning she had chatted with the nurses and doctor from the surgery, those from Macmillan, and family and friends.

Just after lunch, we lifted her back into bed and she fell into a sleep induced by the morphine she was taking.

Except for a one or two brief moments, where she spoke lucidly and calmly, she did not really wake up until she passed away.

It has been a short but difficult illness for her as she has visibly declined day by day and even hour by hour. At the end of September, we’d had the wettest holiday of our lives in Valencia and she’d walked miles in the rain with no ill effects. Six weeks or so later and she could hardly walk up stairs. For the last two weeks even that had been impossible unaided.

But she bore it all with a massive bravery and very few tears.

Now she is gone and we must all carry on without her.

For some it will be harder than others, but then she would not want people to dwell too long on her passing. They must remember all of the good times and handle problems in the same sympathetic and practical way she always did.

I sensed that in some ways, Celia was overwhelmed by all the cards and messages she received and I thank everyone for what they did. She never felt that so many could feel so much for her.

Celia has donated her body to medical science and for this and other reasons there will not be a conventional funeral. Arrangements have not been made as yet and I will advise people in due course.

We are renewing the drive that leads past the front of the house.

There is a hole about twenty metres long and thirty centimetres deep, where the drive used to be. Obviously, the builders, Rose, are very safety conscious, so they have coned off one end with some heavy road kerbs and parked a substantial digger at the other. You'd think this would stop all accidents. Wrong!

Look at these first pictures, where a White Van Man, decided that he wanted to get in front of our house to deliver a parcel to another address. We share a post code and the centroid is outside our house. Any normal person would have seen the digger, realised that the road was blocked off and drive round the stud buildings.

But not this intrepid White Van Man, who then drove across the grass and into the hole from the side at about six yesterday evening.

We did try and tow him out with the Teleporter, but there wasn't really room to get the machine directly behind the van.

Eventually, he was pulled out by a specialist recovery firm and these last two pictures show the aftermath in the morning.

I bet White Van Man doesn't do anything as stupid again. Especially, as it was a rather cold night and he didn't seem to have a decent coat.

The only good thing, was that it was the day after Celia died and in a strange way, it gave me somewhere to vent my anger. But I'd very much rather neither had happened. 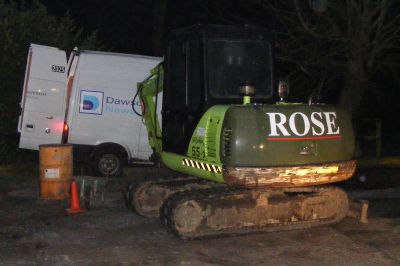 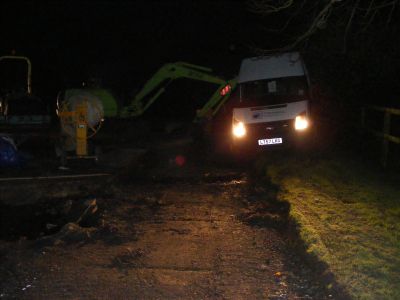 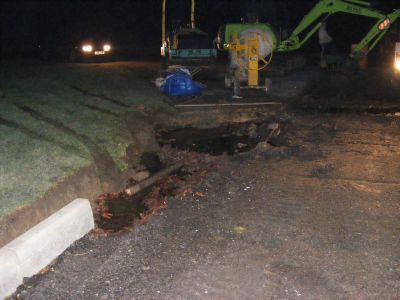 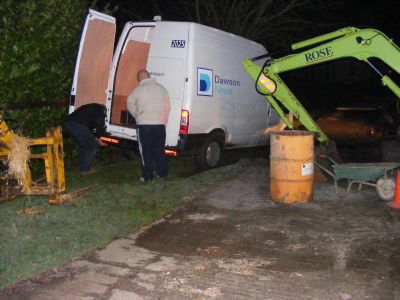 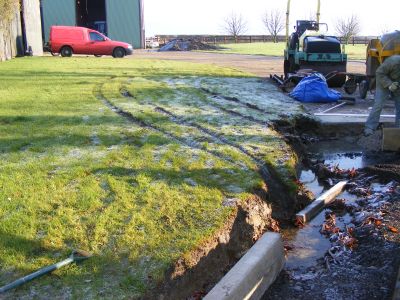 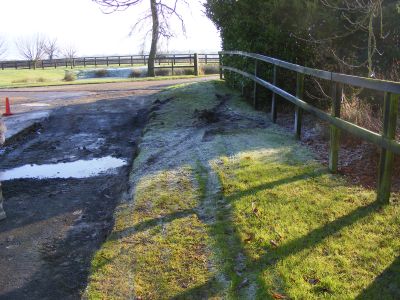 Anna on her Back
For some reason all our dogs seem to lay like this at times. Here is Anna impersonating the bassets.

I should say that she was very tired last night, as she went to London for the first time and had a walk on Hampstead Heath. She travels extremely well and just cuddles down in the back of the car with Lizzie. I think she slept most of the way. 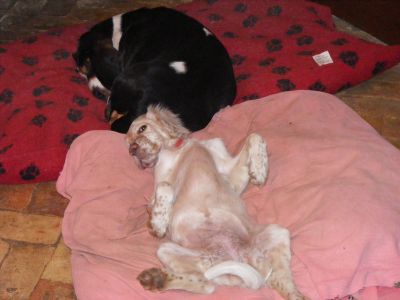 As you can imagine on a stud you have a lot of water pipes and valves. It has been very cold here lately and one of the valves froze solid and broke, sending a spray of water everywhere. As sometimes happens, I couldn't locate where the stop-cock was located, despite going down some very wet and cold manholes looking for it.

In the end I gave up, as I was wet through and frozen, and retired to a hot bath.

But I did find a tool at the Drain Centre in Cambridge. In the first picture you can see the rather fearsome tool clamped around the pipe, with the broken valve still in place. Note the big crack in the valve. But the water flow has stopped.

In the end, I just cut the valve off with a saw and then cleaned up the pipe.

The final picture shows the new valve attached to the pipe.

Note the dent in the pipe, where the clamp was applied. It actually shows how strong these plastic water pipes are.

Having seen the power in this tool, I hope people don't ever misuse it. 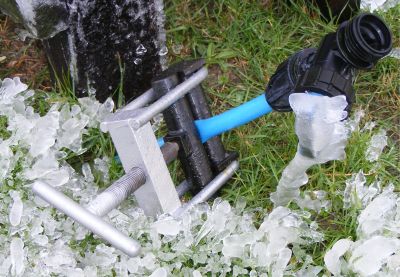 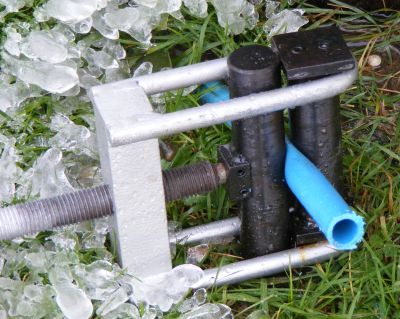 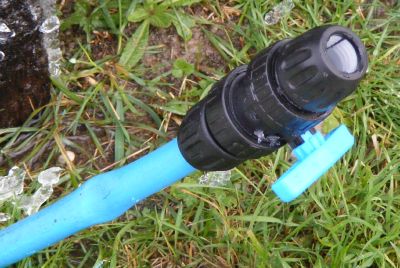 LED Rope lights
LED rope lights are a very exciting development in the field of lighting. The outside of the new offices are lit at night by a single LED rope light. As you can see in the first picture it downlights the walls and sufficient of the concrete outside, so you can see where you are going.

Note that because the light is in the eaves of the building, there is no wasted light and all of it goes where you want it. There is also no visual intrusion of unsightly fittings on the outside of the building.

The second picture shows the rope light screwed behind the beams on the front of the building.

It is only when you see it in this shot, that you realise all the advantages of using an LED rope light in this situation.

1. There is no visual intrusion on the outside of the building.

2. The light is continuous and there is no variation due to separate fittings.

3. LEDs can be dimmed and this light is fitted with a dimmer control.

4. The whole front of the building is lit by one twenty metre LED rope light, which is only connected to the electricity at one end. This means that although the rope light costs just over twenty pounds a metre, in many cases you save a lot of money on installation costs, as you only need to run the LED rope light rather than electricity as well.

5. LED rope lights are available in lengths up to fifty metres and are full IP65 compliant. The only thing you can't do is submerge them in water.

Our installation is twenty metres long and consumes about 110 watts. It gives out 560 lumens of light which is directed downwards in a forty degree angle.

If you want to know more about the LED rope lights we used, then this is the data sheet. We obtained them from Excled. 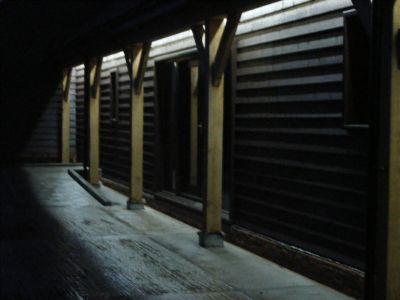 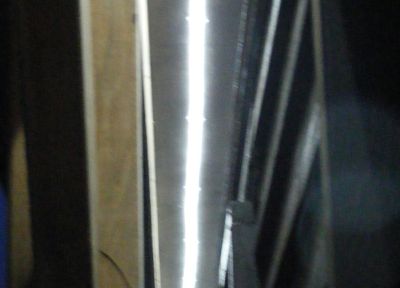