The stud work horse is a John Deere 455 garden tractor powered by a diesel engine. It can easily pull the one tonne trailer, which is used to more things like feed and fencing around the farm.

The advantages are less damage to the ground due to the low ground pressure, ease of getting on and off to attend to stock and very low fuel consumption.

The disadvantage is that you get wet when it rains.

Low pressure vehicles like these are a much better bet for working on the land in many cases than to use expensive 4x4 vehicles, which may be more comfortable, but do much more damage to the land.

Yesterday, I went to the CLA conference called Clean, Green and Viable at Writtle College at Chelmsford.

I found the conference interesting and I suspect I'll fnd it really valuable in the future. Three speakers stood out; Dr. Bruce Tofield from CRED, Jerry Harrall, a very interesting architect who creates zero carbon buildings and Nick Woolley, who discussed the economics of going green.

1. English Heritage are constantly being complained about to the CLA about their negative attitude to making Listed buildings more efficient.

2. It is possible to create buildings that are cheaper to build, that do not need any local services such as water, sewage and electricity.

3. The energy price will triple in ten years.

4. Traditional buildings with large amounts of concrete foundations may not be the most effective way to build for the future.

I came away knowing that we all must look at every building and make sure it fits a low-energy model for the future.
Friday, 27 April 2007 Delivering Blocks

The building blocks were delivered this morning. They came on rather a large artic, that had considerable difficulty getting through the lane to the stud. It may be more economic to use large trucks, but surely for getting into small and difficult spaces, smaller ones are better. 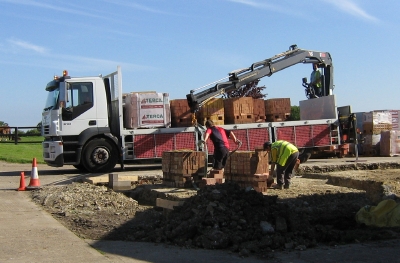 The drainage will be difficult in that the fall is not that great.

The first picture shows the first drains being installed.

The second shows how the concrete is being cut for the drains. The line that was cut was very clean. It makes you wonder why you so often see a jagged edge, where people have cut concrete to lay drains or cables with a pneumatic drill. 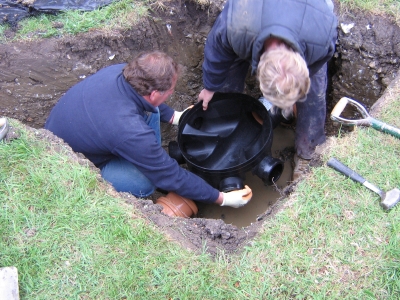 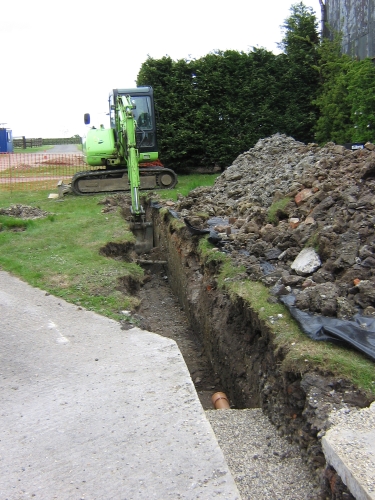 Over the last few weeks, I've done a few trips round the lanes in our truck to take mares to be covered. You tend to trundle along narrow lanes at perhaps thirty kilometres per hour, as you don't want to brake too heavily if something comes the other way.

Twice now, birds of prey, have flown in formation with the truck a couple of metres above the ground. One was directly in front of the cab and moved from one side of the road to the other, whilst the other followed alongside me on the other side of the hedge. They both flew like that for perhaps three or four hundred metres.

Obviously, the birds were hoping that the vibrations of the trucks would frighten a mouse or some other prey to reveal themselves. In both cases they were unlucky, but would they do it if it didn't work?

I mentioned this to Michael, the stud groom and he said it was common practice of sparrowhawks.

I'll take the camera next time and see if I can get a shot.

These two pictures were taken when Tattersalls came to see the yearlings. This picture shows the colt nicknamed "Moon and Sixpence" because of his blaze, who is by Medicean out of Degannwy.

He is a half brother to several winners including Keen Winner, who won the Hong Kong Derby and Sunshine on Me, who won three races for Chris Wall in Celia's colours.

The second picture shows the filly out of Far Port by Kyllachy. She is the second foal from the mare and her full sister is called Moonlight Angel and is in training with Walter Swinburn
Sunday, 22 April 2007 Vague Shot

This picture of Vague Shot was taken in April 2007. He was born in May 1983 and is still fairly fit for a horse of his years 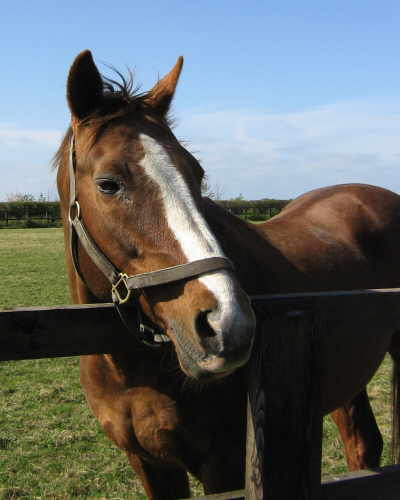 An Aerial View of the Stud
This aerial view was obtained from Microsoft Live Maps.


Note the paddocks to the South of the buildings and the large outdoor school to the East. The school is actually sand, but obviously reflects light pretty well so it shows up as white.

The picture was taken in early spring, as is shown by the rape just about coming into flower.

This image was actually obtained to see if we could see the drains in the fields to the East of the farm buildings, as we needed to mole drain them. Luckily we got it right 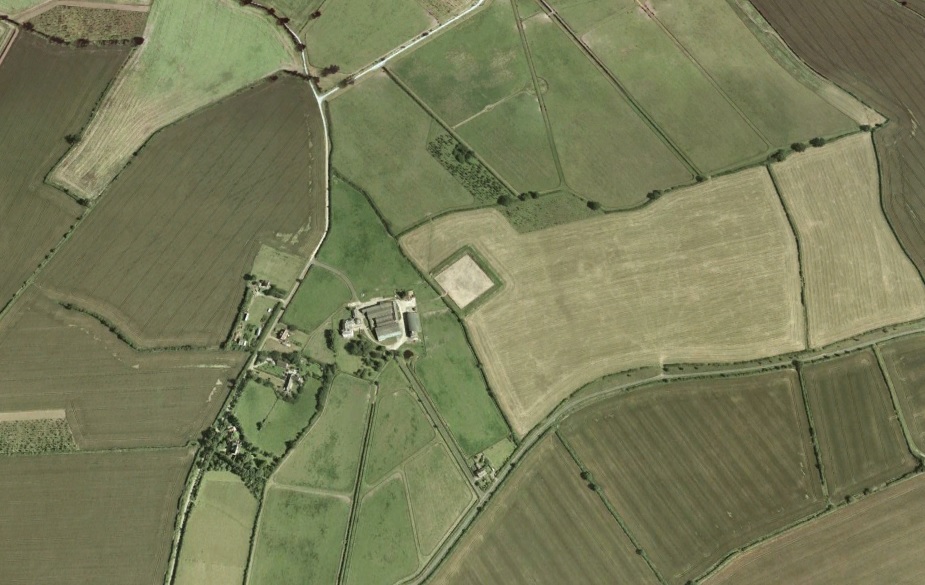 The foundations for the building have now been poured. It took six or more loads of concrete

This shows the care being taken to remove the wall from the back of the old cart sheds.

They were then stacked carefully behind Lyndsey's office. 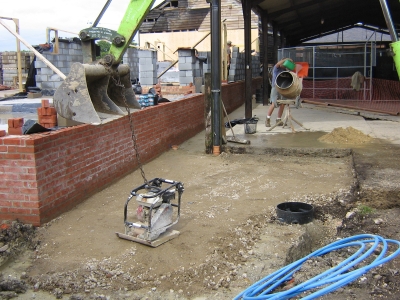 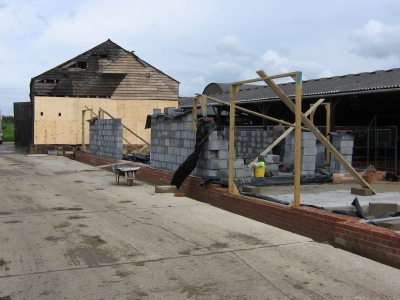 Friday, 6 April 2007 Lasting Delight and Her Avonbridge Foal
This is the broodmare, Lasting Delight, and her filly foal by Avonbridge, who was born on the 18th of March.
Click on the pictures to get a larger image 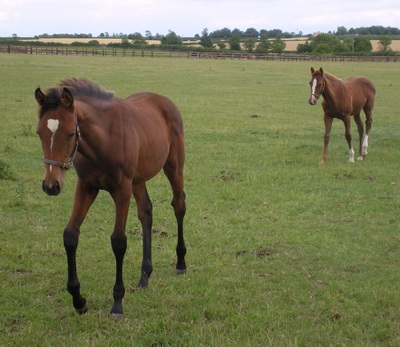 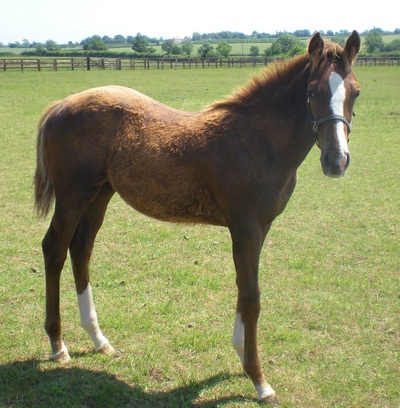 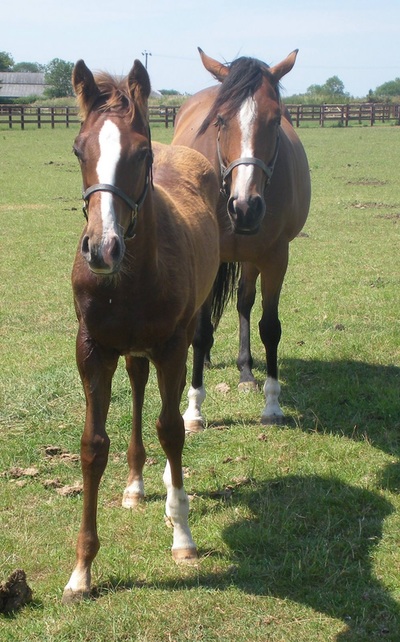 This week the builders have started to put the foundations for the new offices into the ground.
Note the depth of these foundations. Are we building a skyscraper? It's just that rules is rules.

You can see here alongside the old barn, which has no foundations at all. It's only stayed up for several hundred years.

But then what do I know about planning and building?

Click on the pictures to view a larger image 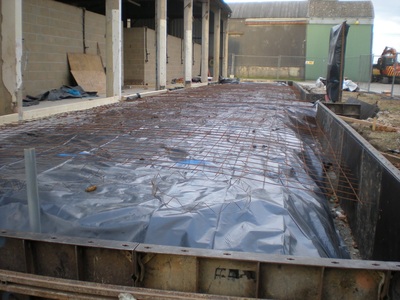 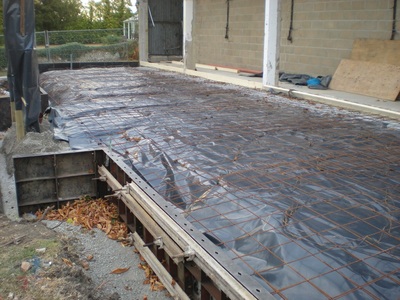 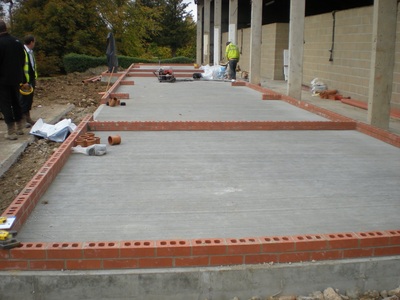 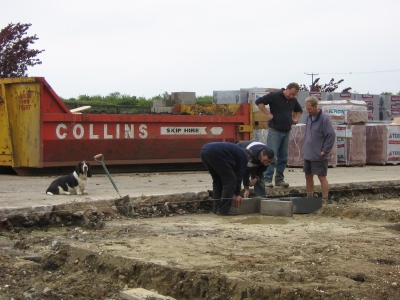 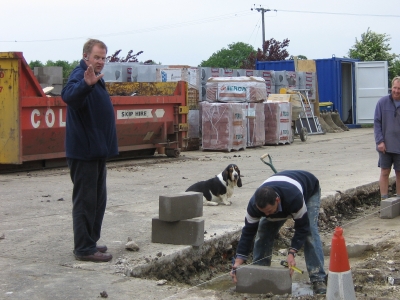 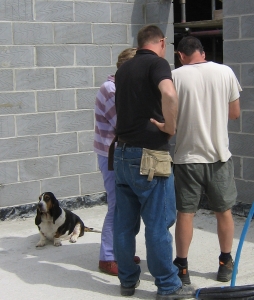